"Ambitious but Rubbish" The Phrase often used by the old top gear latterly The grand tour presenters, Clarkson Hammond & May, in their Failed comedy builds on their shows.
Speaking of comedy builds ...In just five days it will be exactly one year since i collected an abandoned cafe racer project 1993 Yamaha XJ900F which came with a vast quantity of spares some new but mostly old and of unknown quality. After a complete tear down and initial assembly including frame repaint rewire engine clutch and carbs given a strip and fettle. On Thursday the 22nd of April last year the XJ900F passed its MOT and That XJ900F was finished, and subsequently sold for a good price in the summer with some of the new spares.


However i had an unregistered frame and two allegedly good running spare engines and three sets of carbs and lots of other junk.
The planned build and its goals.
I want to build a working road registered bike it needs to be comfortable have decent range it might be faired or naked i have not decided yet, but it must be built where possible from what i have already laid around here left from the xj900f spares and a few other parts off numerous street fighter builds and various other accumulated junk.
I want to keep refinishing and any frame fabrication to an absolute minimum and i want to try to keep the entire build down to no more than £250, the tiny budget as already been severely eaten into, in order to get a registration i purchased a 1995 Yamaha XJ900s frame and Yokes off EBAY for £30 and to keep things simple and give me the fuel range i want i purchased a green fuel tank off xj900s for £15 which had around £10 worth of petrol still in it when i collected it.
So i am calling my outlay to date £40. so that leaves me just £210 left if i make it on budget.
The final cost may not include lyres battery and oils and other service items like oil filter and brake pads, i want it to be safe obviously.
Not 100% on a Style as such yet, but more Scrambler in style would suit my needs in this bike i think.
Something like this in style 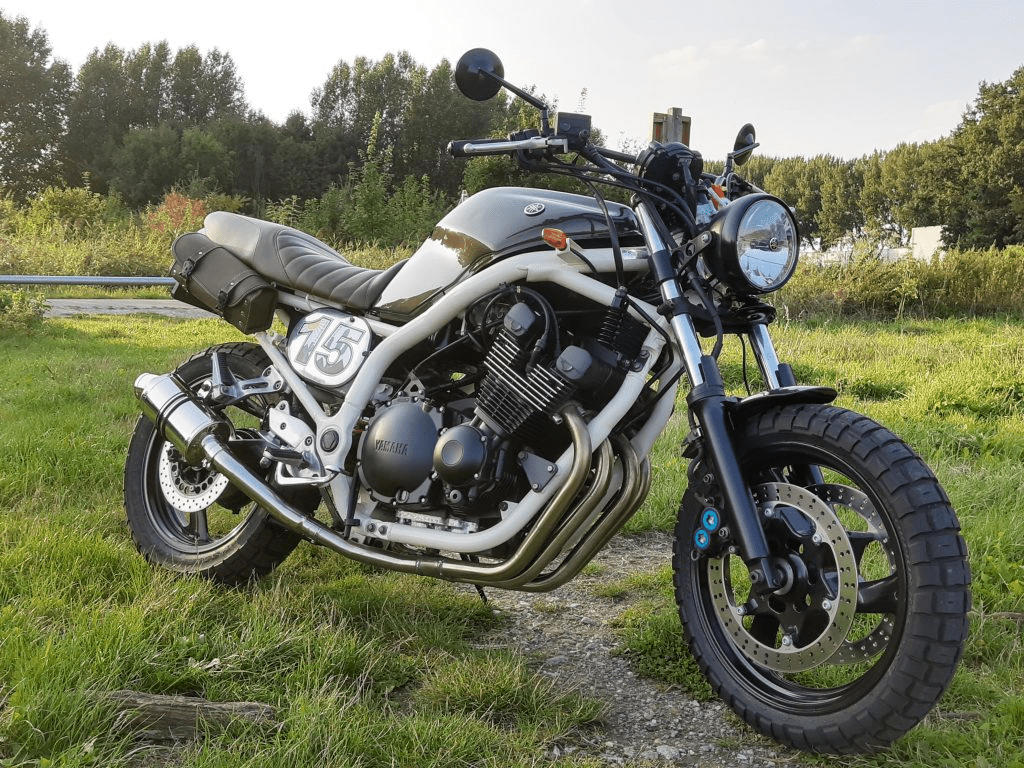 Or a more minimalist approach . 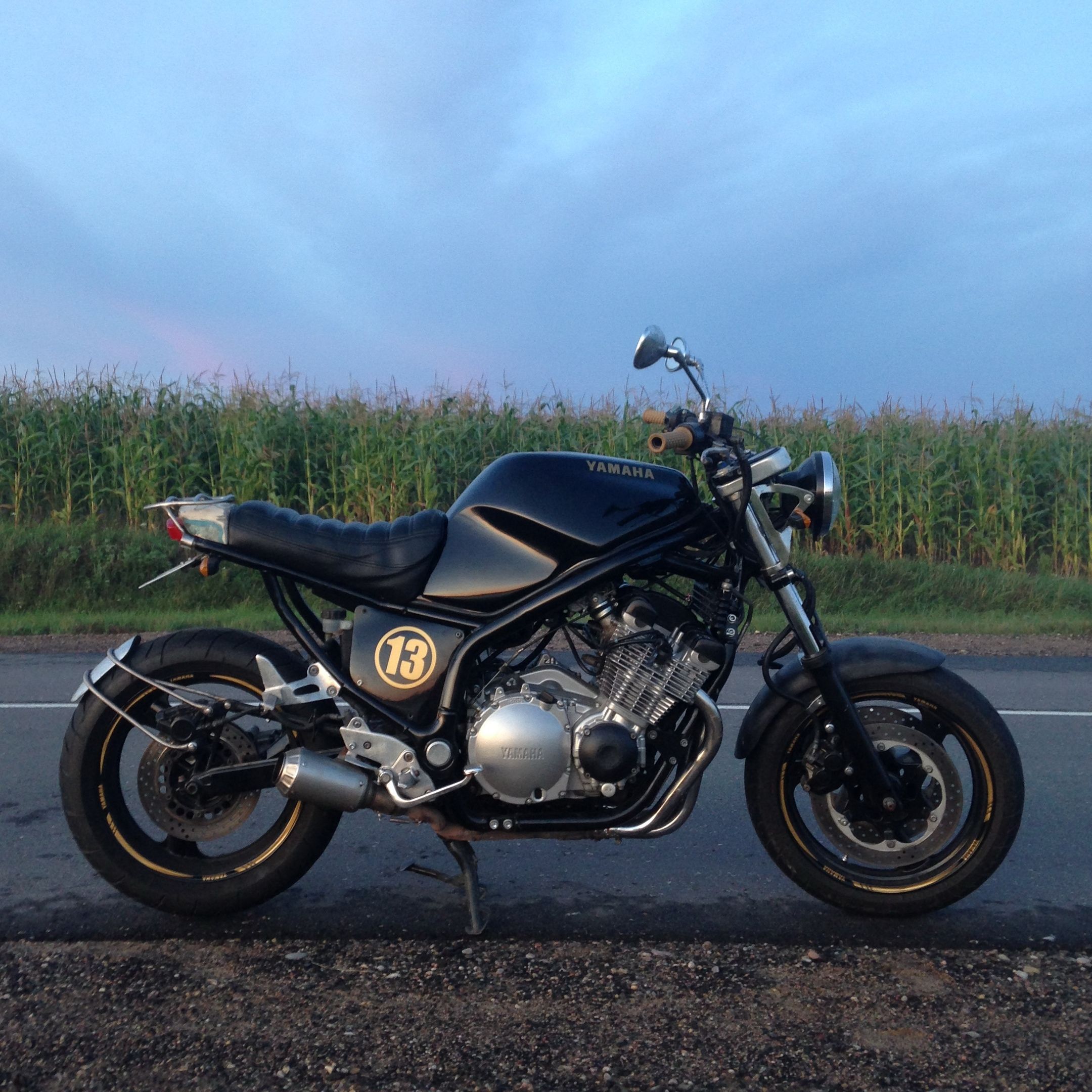 The engine on inspection is clean looks fine not sure i want to get into a full top end rebuild and not even sure its at all necessary, just clean up the paistons and head re ring as its down bores are fine i have yet another spare engine left if i need it or any spares anytime. 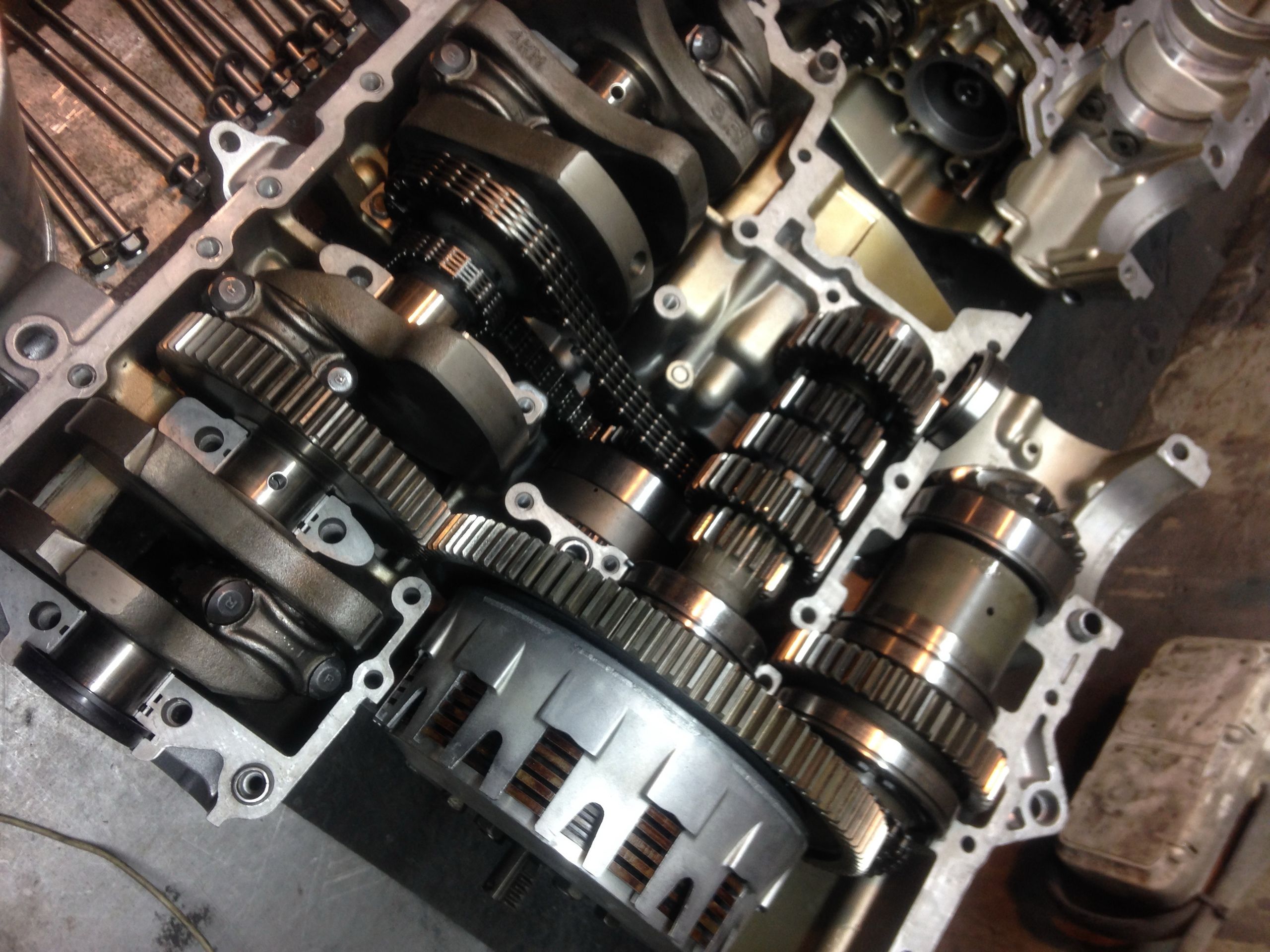 Engine is now back together, this severe weather this past few weeks has kept me firmly indoors and i had time to get the motor built up with a gasket set that was in with the new spares .
The Frame needs tidying up , but its only minor rust chips and in line with the restrictions of my meager budget i bought 4 (£1 shop) rattle cans and a red oxide primer can.So my budget remainder is now only £205.
Looking through the parts pile i found three (untested as yet ) ignitors, and the pickup coils i am using checked out ok in the 650 ohms area. I am worryingly lacking any wiring loom, which could rob me of valuable money if i am not careful. I have some scrap looms from Peugeot cars, i can use to make up a loom, and i have a diversion 900s iGN lock but no key, Handle bars will be some Gold renthals i have, and the Handlebar switch gear all tested as fully functioning with the multi meter from what i can tell.
I have decided on a seat, and will be using a perfect condition Triumph Tiger explorer riders seat i tried to sell multiple times on ebay with no success, its on the low budget build here now.
A few nice sunny days hopefully and ill post up some current pics.

What can i say.
I knew instaling the XJ900f motor in the Newer diversion xj900s frame was not going to be a straight droppo in, but a couple of hours tonight revealed its not just a few plates and tab fabricating required.
I always thought the Divy 900S motor was slightly more laid down in that frame than the XJ900f model.
But its the engine front plate brace tube it looks to be in the way of the exhaust front pipes, but not 1005 sure yet but looks wrong. I was struggling trying to check with the detachable frame tube off and engine on its side. but no matter how i positioned the frame it was out. I Need home made plates the 90f plates are too small/ short and i only have 3 anyway, plus hole spacing is different.
I am going to ditch the original front tube brace tube and make my own box section version, it wont look as prety perhaps, but i need the ease of fabrication and the bolt in side tube top perimeter frame is not exactly beautiful anyway.
I am going for gearbox output drive to frame/ swing arm tube alignment and position and just starting from scratch on the mounting plates both back and front.
I was thinking of going oddball on the carbs too, and not bothered about power, so was planning on going single carb. so the difference on the intake angles wont realy be a problem if i go oddball carb setup.
Boy dont i pick my chalenges and cause csome hastle for my self.

Im enjoying the build! Engine swaps always end up being more complicated than they initially look

Weathers turned for the better now, and i promise to do do some pictures . but i only got my phone and in the black hole i work in even with lights on my pics look yellow and grainy. outside the phone seems way better somehow.
Strange because for years i used to take pics in there with an old blackberry playbook which was not a very high res camera IIRC yet it seemed to work great.

Well several months down the road, and my mate Dave just dropped me off a spare XJ 900 igniter he found , and it checks ut as ok so i got a full set now.
I am ready to stzart doing little on this bike again but its low priority in my world and i got lots of house and car stuff demanding my time, in fact i was about ready for selling it last month.
But with that igniter though a small thing its another box ticked and i really must try and stay motivated.
You must log in or register to reply here.
Share:
Facebook Twitter Reddit Pinterest Tumblr WhatsApp Email Share Link