The best Scrambler yet? 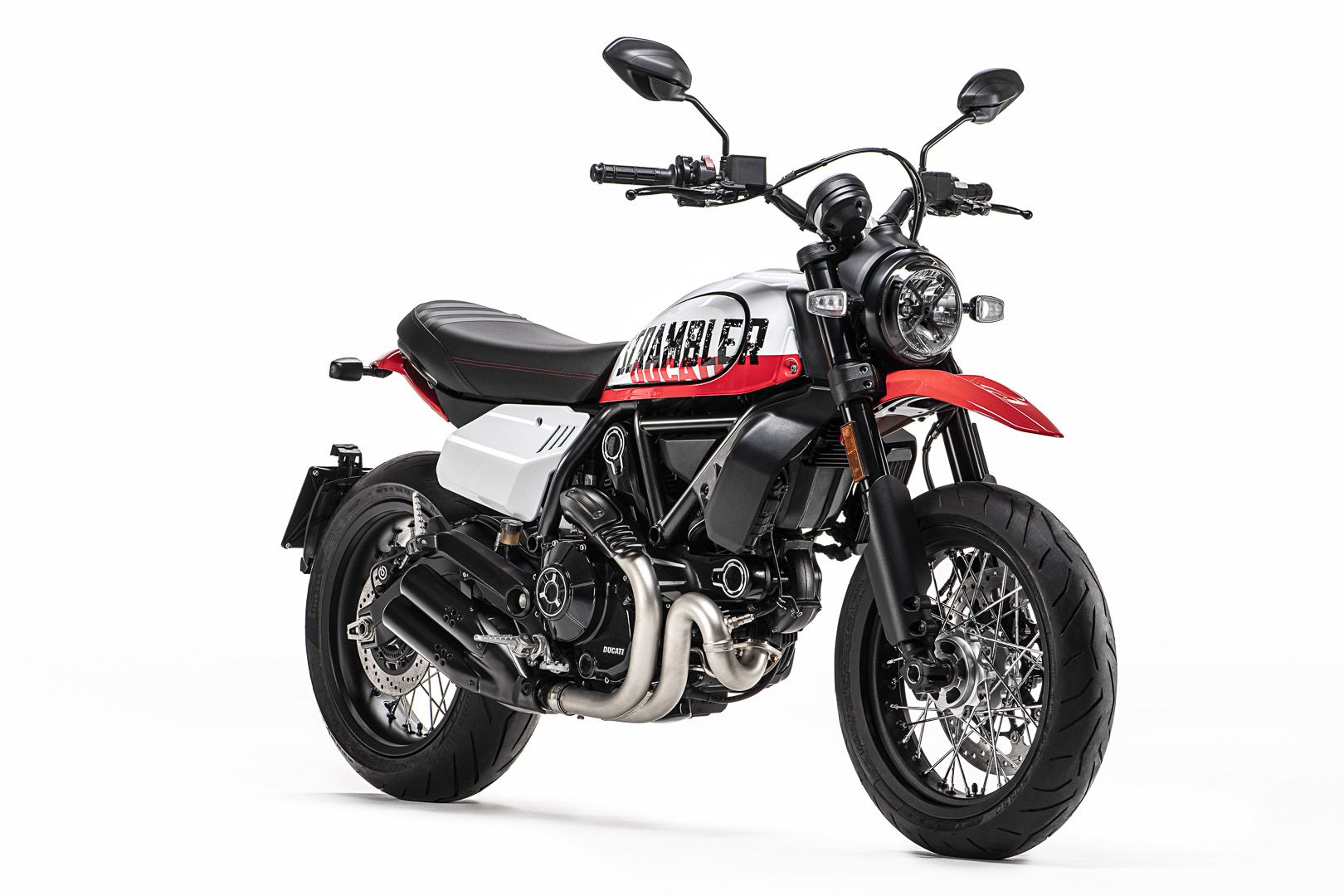 Looks great!
It's interesting that Ducati runs the pipes down low on their scramblers (don't know if this is true across the board). A bike I've been lusty about is the Triumph Scrambler ... I'd run the pipes low like this one, though.

Chickenstrip said:
Looks great!
It's interesting that Ducati runs the pipes down low on their scramblers (don't know if this is true across the board). A bike I've been lusty about is the Triumph Scrambler ... I'd run the pipes low like this one, though.
Click to expand...

I really like the Triumph Scrambler but the high pipe turns me off. There is an aftermarket but it takes time and it ain't cheap. I think the Scrambler Urban Motard borrows some the best elements from the other models in a nice package. At the heart of it is the engine of course. I can't imagine Ducati selling the air cooled engine for too many more years though. 6 inches of suspension front and back should make this Scrambler a decent ride over bumps too.

I put 21k miles on a Scrambler 803. It's a nice engine and I loved the midrange punch and roll on, and it's got one of the best soundtracks in motorcycling. 7500 mile valve checks were annoying (and very expensive if you don't do them yourself)....access to the rear cylinder head is rough. All of the 803 Scramblers, to my knowledge, are still using a cartridge in only one fork, and it's a bottom of the barrel KYB part that doesn't work very well. The other fork only has a spring and a dummy cartridge in it that doesn't do any damping at all. My bike was a 2016 and I'm sure Ducati has ironed out some of the issues from early bikes, but my bike, despite having a ton of suspension travel, barely used any of it. It was way oversprung, and had way too much high speed compression damping, but hardly any rebound. So you would hit bumps and they would break your spine, and then the forks would rocket up off the bump breaking your wrists too. I almost had the front tire come off the pavement just making turns through bumpy (paved) intersections. It was truly terrible -- I had never modified motorcycle suspension before owning that bike, but it was really, really, REALLY bad. I haven't ridden a newer one, but have heard the fork action is better, stock.

So I spent around $1500 fixing the suspension, front and rear (Ohlins DU505 on the rear, Maxton adjustable cartridge and new spring up front) on mine and it still wasn't great because it was still a single cartridge (though adjustable now) in the forks. Dual cartridge setups in the front would have cost more than I wanted to spend, and require a some machining to remove a grub screw. I also spent quite a bit on an ECU flash and Rexxer user/tuner unit, G2 throttle tamer, grips, etc, in an attempt to iron out really terrible on/off throttle response. I never quite solved that issue, but I've also heard Ducati tamed that on a bit on bikes after 2018 or so.

That engine was awesome though -- I will own another 2V aircooled Duc. Get it in its happy place and it was the perfect street engine. 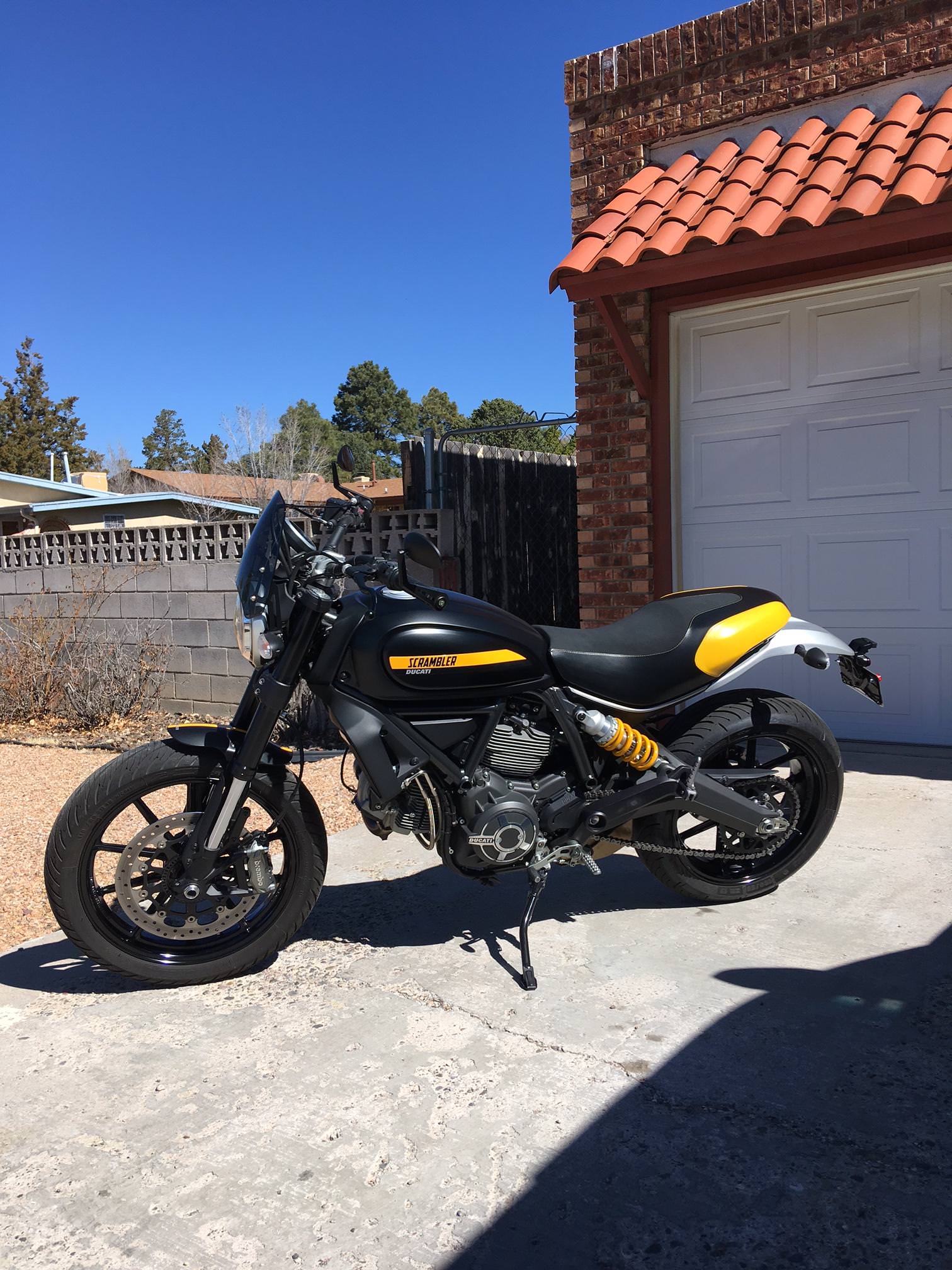 This bike was supposed to come out in April. Production delays? If yes, not sure why as it's very low tech: no engine maps, no traction control. I'd love to throw a leg over it anytime now, Ducati. Where's my test ride!

I thought about buying that bike. I even found a good/ decent deal on one. I just can't do it. I think I like the idea of owning a Ducati more than actually owning one.

Side note: there are a lot of shady Ducati dealers out there!

I've had the opportunity to do demo rides on a few Ducati Scramblers. I like the models that are prepped for mild off road with skid plates, such as the Desert Sled. The 1100 engine is my favorite though, which isn't offered in the Desert Sled. It doesn't feel any heavier with the larger engine, so I see no reason not to do it.

There have been some models with the high exhaust pipes, by the way.