I have a bunch of bike parts. Some left over from other projects, some fmeant for projects that never went anywhere. I don't have inspiration to do a dedicated build, but need to build something. So I'm going to use what I have. 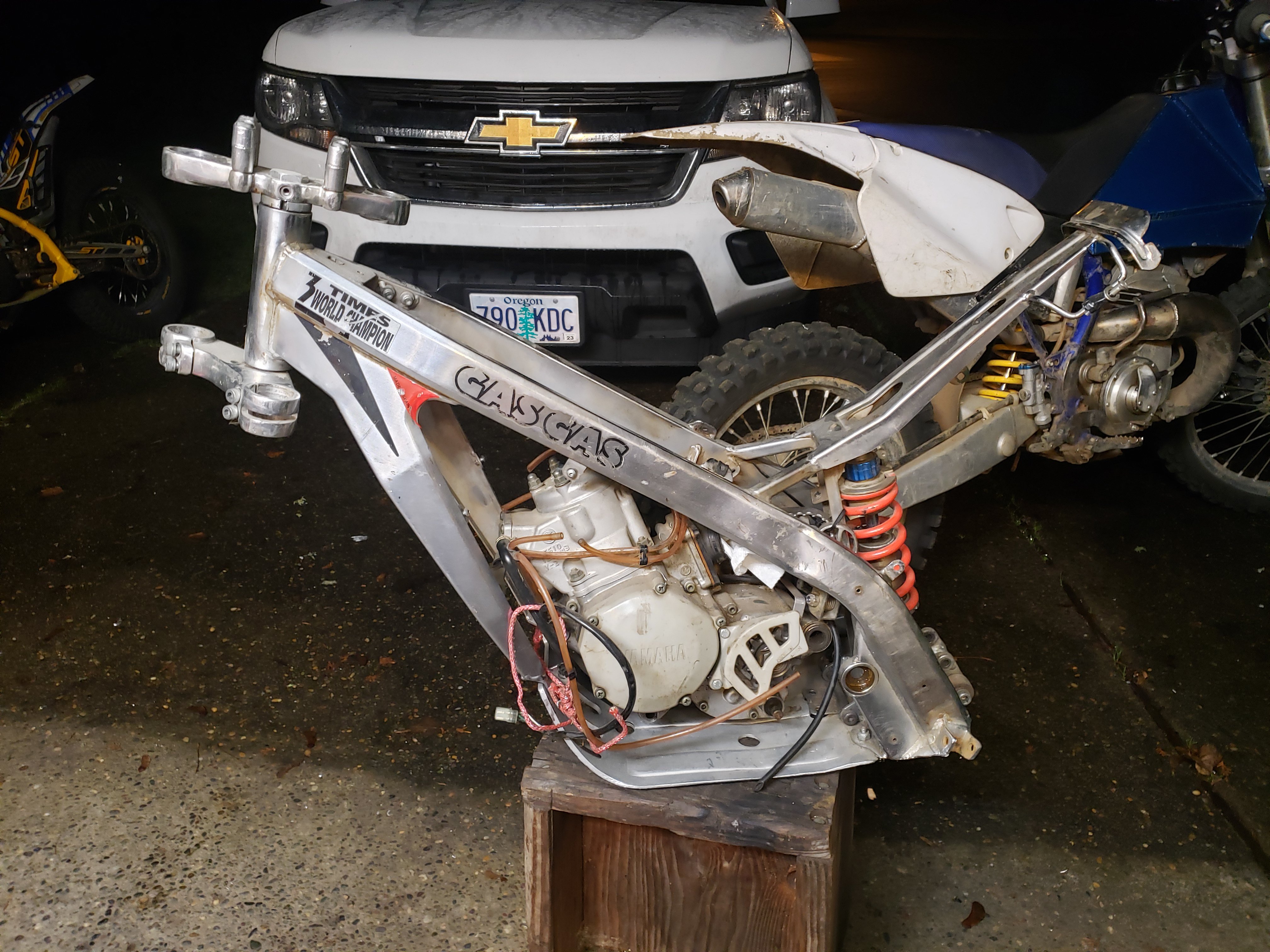 Reality check: It fits. Lets do this. Step 1 is fit the swingarm motor mount. This turned out to be super easy. 2 identical spacers on the lathe, and it's just right. 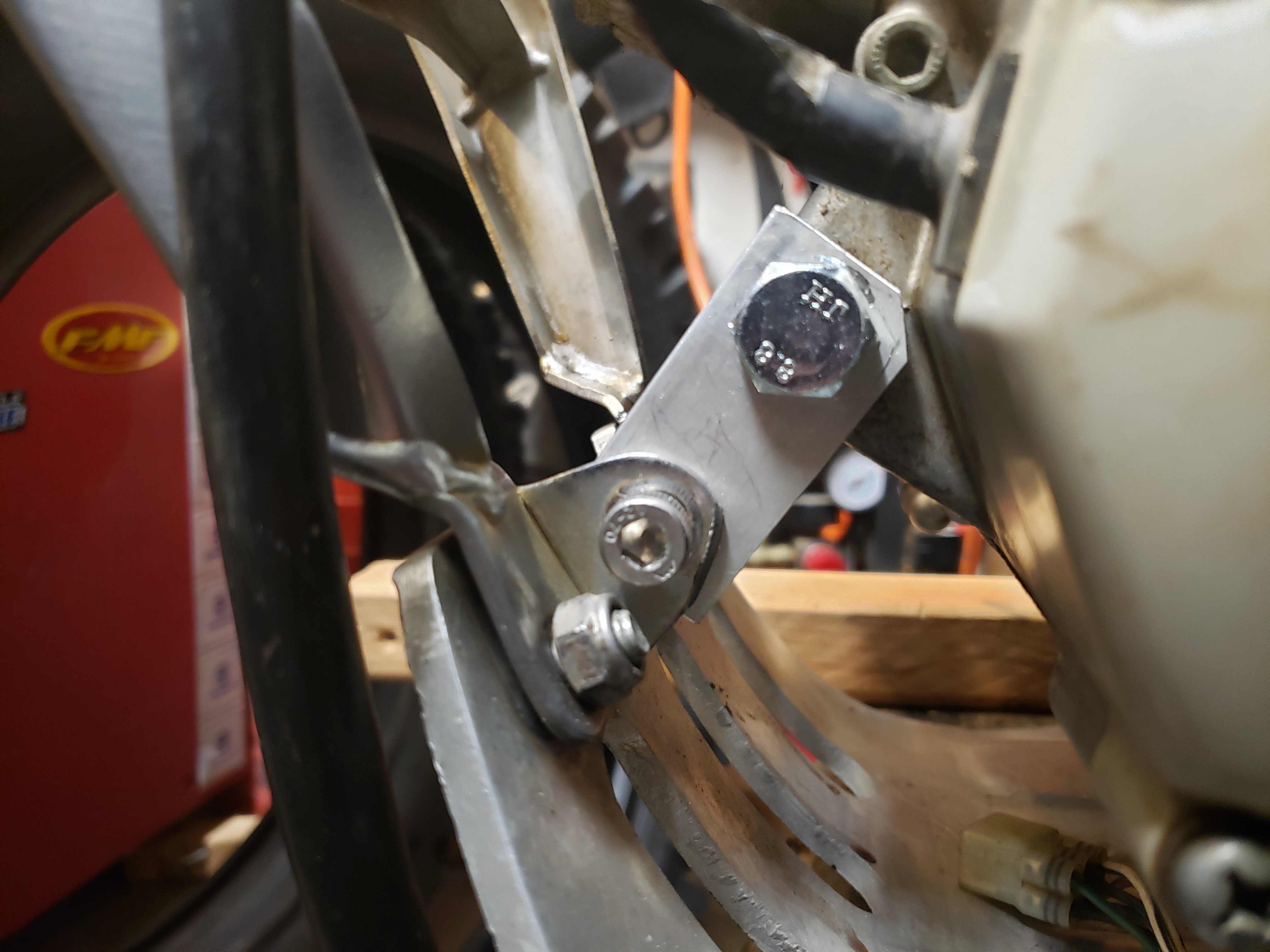 Step 2: the front motor mount. This probably isn't good enough to ride on, but it gets the motor in the right place to line everything else up. Alignment was carefully calculated for optimum sprocket placement relative to the swingarm angle. I did this by making the yamaha text on the stator cover parallel to the skid plate. 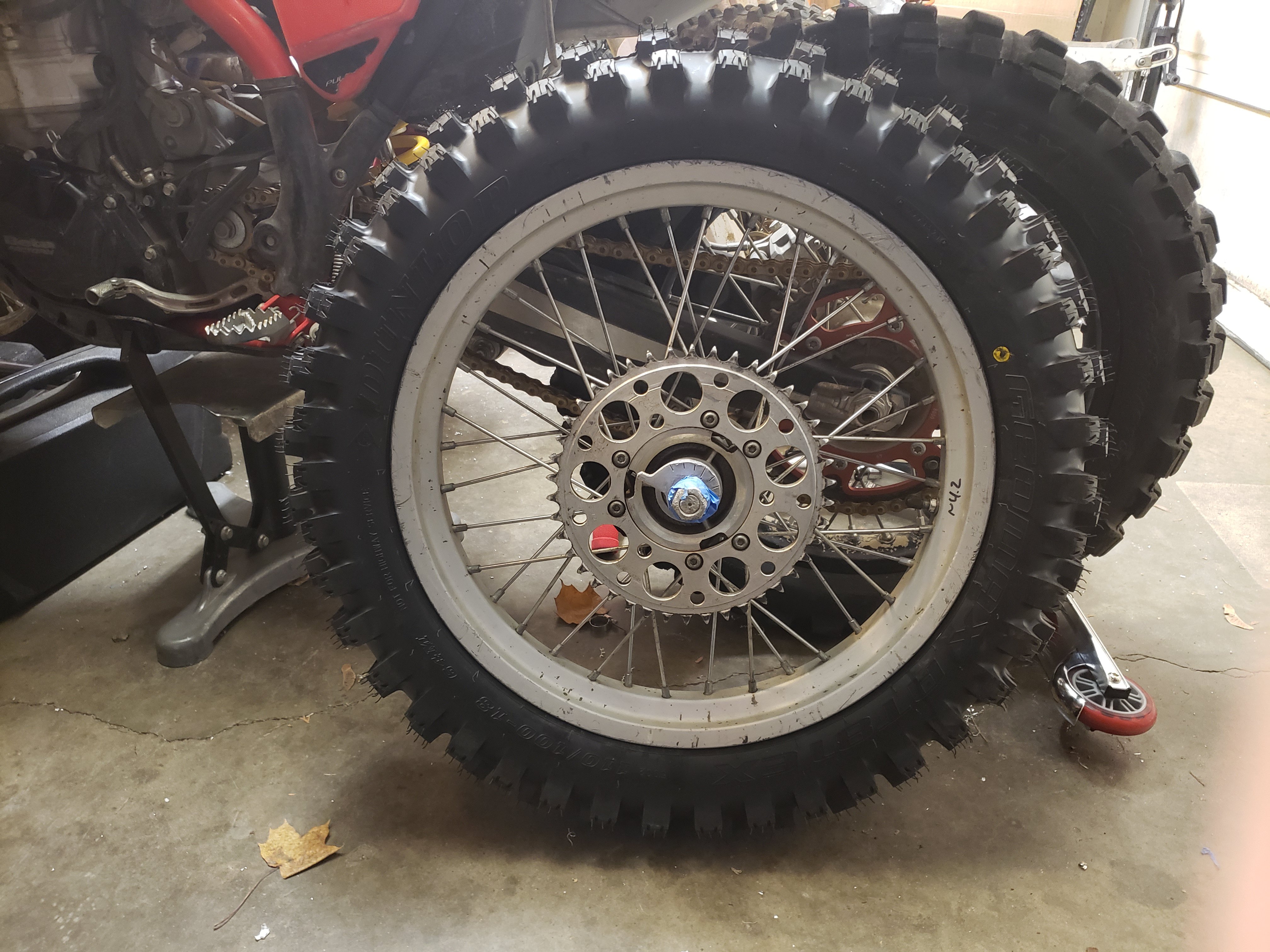 The bike isn't rideable but I mounted fresh rubber anyway. Long story short the tire was bought for another bike but never got installed. It's an endurocross knobby, and mounted up quite nicely to the tubless trials rim. It did require a strap and compressor to seal and seat the bead. 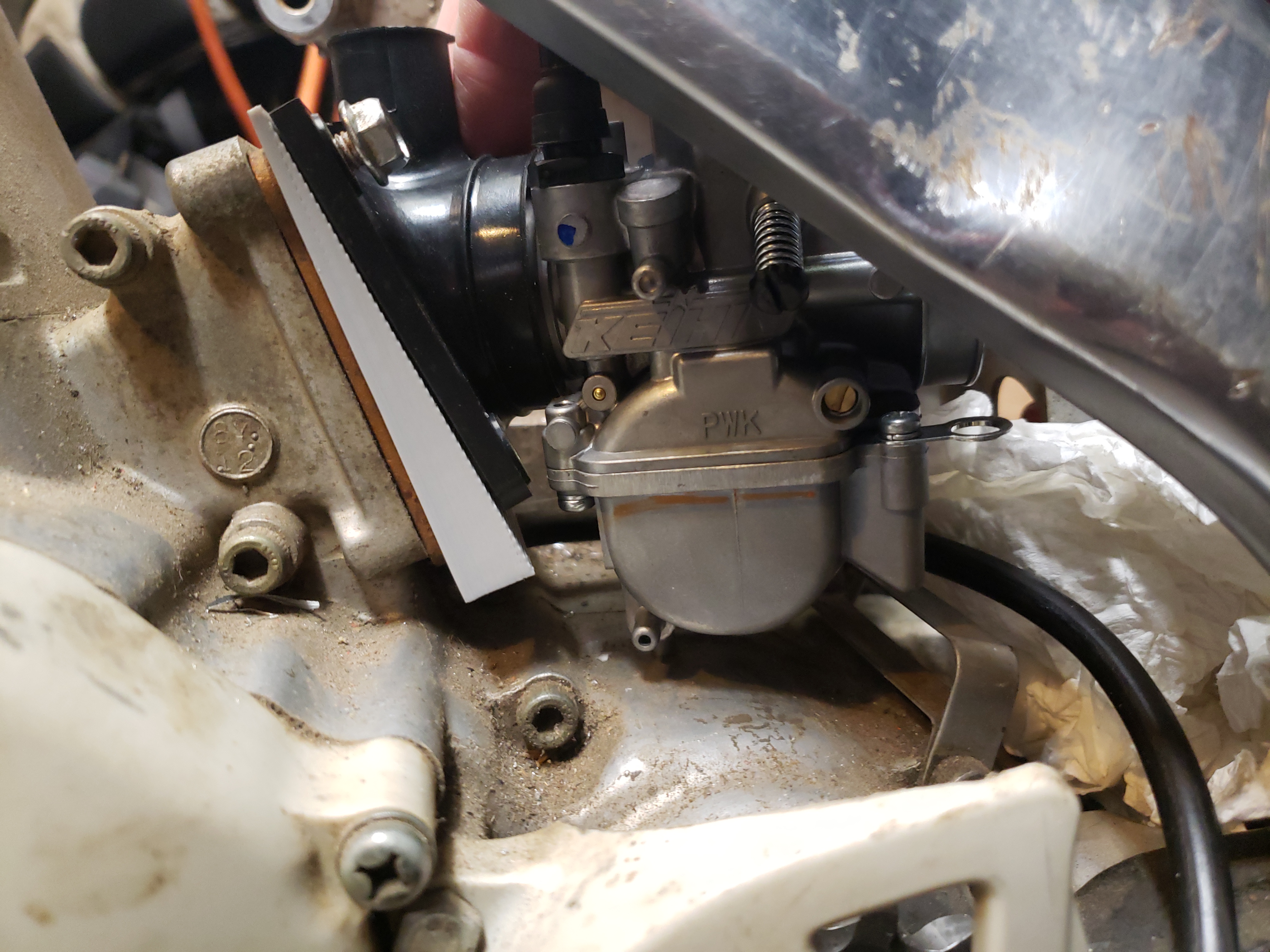 I did buy some parts for this project. A Blaster carb boot and a PWK28. They don't quite fit right so I printed a wedge of plastic to test fit an adapter. It looks like it will work so I'll make a wedge in metal. 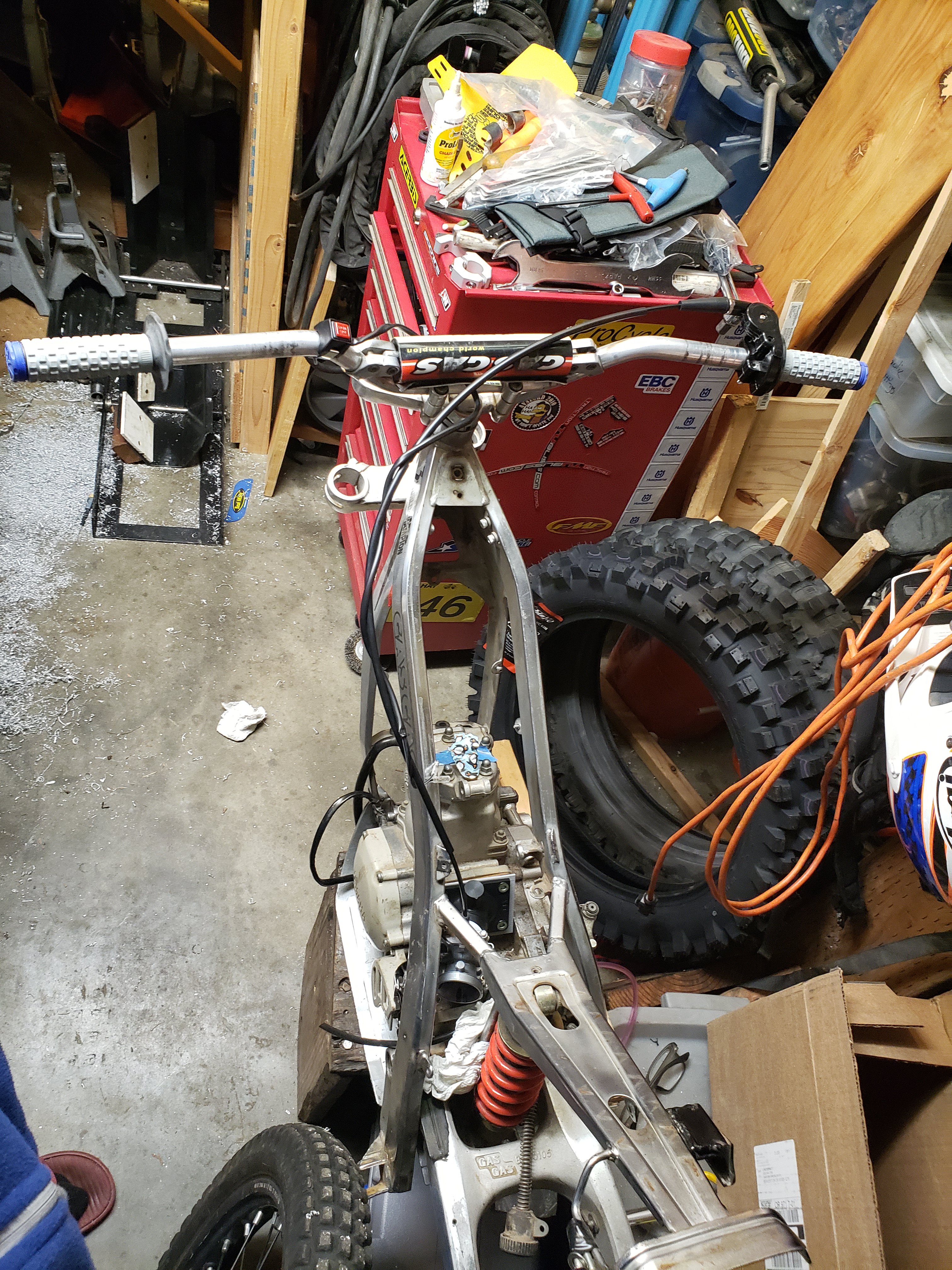 Finally (catching up to the current state of the project) I put some new grips, kill switch, and a throttle on the gasgas handlebars. So now I can hold something while I make brrrrrrr noises. And I can confirm that the throttle cable reaches the carb.

That is an interesting project.

Yinzer Moto said:
That is an interesting project.

Thank you. This will probably be a slow build, I'm doing it 1 piece at a time...

Nice build and one you could develop overtime to be a good performer.
On the YZ into trials bike theme, i can remember a 80s build with a no visible numbers 70s YZ400 engine bought from a Police auctions (stolen unrecovered presumably), a mate dropped it in a greeves trials bike. He did a spacer plate under the barrel/ Jug , it was not scientifically developed simply a frantic attempt to tame the old yz down a little, and it did work quite well .

Kudos on using what you have. Tinkering around is the best!
Curious to know the type of riding you might intend to do with this?
I ask because I raced enduros with an '06 YZ125 and like virtually all 125's, they have no bottom end for trials. Are you looking at doing a fun/lightweight trail bike using one of the universal seat conversions?

The goal is a singletrack flow sort of bike. I don't have the original gas tank, so I'll be making one that has a seat on top. Probably 2 gallons.

I like to think I can retune the 125 motor to make it useable in the wooks. It won't be a trials motor, but it will head in that direction. I went from a 36mm carb to 28, and the only part of the pipe I'll retain is the first inch from the cylinder.

I rode the 125 motor back when I got it and found it almost as challenging as the suspension. So yeah, it might be no good at all. But if some real trials bikes us a 125 I figure I have a chance.

Luke
Any updates/progress on this build?

Luke said:
Thank you. This will probably be a slow build, I'm doing it 1 piece at a time...
Click to expand...