I thought it was lame.

It didn't do justice to the original but I understand that I am probably in the minority since it seems to be universally loved.

I enjoyed the original despite a totally unrealistic plot. It just so happened that the original was released the month after I got my Naval Aviator wings.

I just saw the sequel two days ago. I thought it was better than the original in every way except that the plot was still totally unrealistic.

klaviator said:
I enjoyed the original despite a totally unrealistic plot. It just so happened that the original was released the month after I got my Naval Aviator wings.

I just saw the sequel two days ago. I thought it was better than the original in every way except that the plot was still totally unrealistic.
Click to expand...

We were in NPA waiting to start flight school. We were like, "I don't know what I've gotten myself into, gut it looks AWESOME!"

I'm going out to try some knife edge in between bridge stanchions...

Tossing the NATOPS in the trash was both awesome and realistic.

misanthropic said:
Tossing the NATOPS in the trash was both awesome and realistic.
Click to expand...

We just watched the original, and have our tickets for the 2022 Movie.

Cant wait, i think it will be close to 3 years since we've been to a movie theater.

2whlrcr said:
I'm going out to try some knife edge in between bridge stanchions...
Click to expand...

True story: Circa 1988-89. I was a FE on Chinook helicopters and we participated in the local annual Air Fair. We had 5 Chinooks parked end to end on a service road that ran between the active runway and a parallel taxiway, probably less than 100' from the active. For some reason I stayed with my aircraft to service a rotor head while the rest of our aircrews went back to the show grounds. I was in no-mans land and basically stuck out there. I had a front row seat! The F-14 was doing a knife edge pass and it was AMAZING!!! On top of that Chinook I felt like I could have reached out and touched it. I could feel and hear the vortices making that swoosh...swoosh...swoosh sound after that beautiful beast ripped by. Pure raw power, I'll never forget that.

In 1987 I did a short cruise on the Nimitz. The Nimitz was just going from San Diego to Seattle with no air wing on board. There were just a few helicopters to shuttle journalists once we got near Seattle. It was also a Tiger cruise so they did an airshow out at sea. Probably the high point of the show was an F-14 doing a Supersonic pass over the ship at low alttitude. I could see the F-14 approaching with vapor clouds forming off the wings. It got bigger real fast but no sound until it passed overhead and then BOOM!! I could definitely feel that.

I also remember being on the Enterprise between cycles so they parked my H-46 right in front of the Island during a launch cycle. At that time the aircraft on the carrier included the A6, EA6b, A7, S3 and F-14. When most of the Jets launched they would shoot down the cat, get to the end of the deck and sink a little before climbing out. The F-14 was different. When it went to full power just before the cat shot you could feel the 90,000 ton carrier shaking. When it launched there was no sinking at the end of the deck it just went up. It was amazing to watch, hear and feel.

This is as close to the Nimitz as I got, I'm in the boat on the right. Well actually we ran lines across at one point transferring cargo between ships. Also had walked around the Ike too while being built in the shipyard. 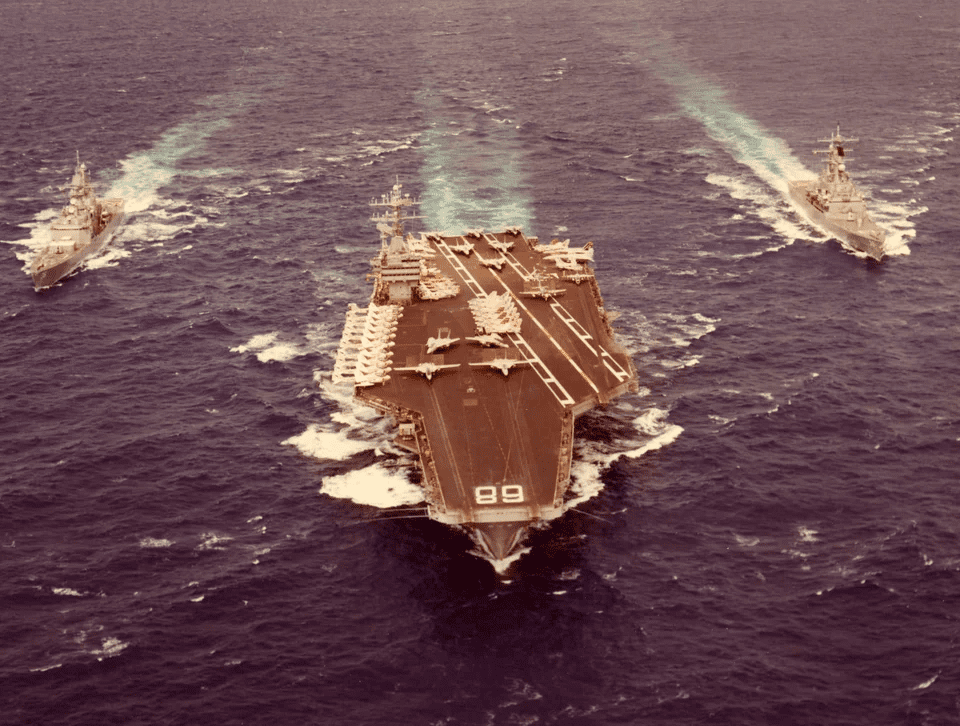