Post up your favorite ride or recommend a route or scenic area. Let's share this great riding state.

It's the middle of February and I'm itching to get back on my bikes!

I've got a few hidden gems that I've been keeping to myself for camping.

There is one dirt road that travels quote aways that turns off into a large reservoir. I'll have to find it. That was a terrific day of riding.

VT is my favorite place to ride in.

Sommerset Reservoir I think it is looking at the map.

woods said:
Sommerset Reservoir I think it is looking at the map.


99% sure that was it there. That was a nice little road to take.
Click to expand...

Somerset reservoir is on my list for both riding and kayaking.

Another tip. When riding north to Burlington, forget taking route 7, instead take 4 west to Fair Haven and enjoy a glorious ride up to Vergennes on 22 with Lake Champlain and the Adirondacks to the west and the Green mountains on the east.

Fuel up in Wilmington then head west on 9 for a mile or so to Forest rd 71. It's on the righ where the big black tube crosses 9. Then on to a nicely maintained dirt rd. (though can get a bit marbly at times). Take a minute at the first dam where the little white farmhouse is to get off and get a close look at the tube, you may be surprised at it's construction.
Ride 71 8-10 miles staying left to Somerset res. Take a breather and a few photos and saddle back up and head back the way you came. A couple of miles and you will see (again) Rt71 turn off to the right . Turn there and ride the dirt rd along the Airfield and into the hills.

Sometime later.. (about 10-15 miles) the road abruptly ends at a tee. (The Kelly Stand rd) Turn right and ride past Grout pond and a few more spots eventually hitting tarmac and traveling a few miles to Stratton town. (little town hall on left IIRC) Take a left on W.Jamaica rd (Paved) From there ride to Mountain rd and go left past Stratton village/skiway. Then down to rt 30 in winhall. Bang a left(7-11) then a quick right onto Winhall Hollow rd. ( Landmark; The Red Fox inn) a mile or so to South rd (rt at the fork) and follow until you cross rt 11 and into Peru.

Turn rt onto Hapgood pond rd and follow the mix of dirt and pavement all the way to the tee at Langrove rd(dirt), Turn left and follow a mile or so to Little Michigan rd a slightly awkward left turn there

** note, if you go straight there remaining on Langrove rd it will take a nice long trip into Weston and the VT Country store.**

Little Michigan turns right at the Natnl forest sign/Barway and becomes the Danby Mount Tabor road./Forest road 10. Ride through the barway and follow the forest Hwy. all the way toward big branch and rt 7 at Brooklyn rd Mt Tabor.

Fuel up if need be and head south on rt7 and ride past Manchester to exit 3 (East Arlington)where the Orvis HQ is. Turn rt. off the exit, first rt. To the stop (tee) and another rt.(Kansas rd) to the Kelly stand rd.(dirt)

Follow the Kelly Stand all the way up, (it is a nice fun ride uphill as it can get a bit manky and less fun on the downhill) to where Forest rt 71 meets it. Turn right on 71 and head back over the hill to Somerset Airfield then back to rt 9.

A really nice day trip, If you hurry it's a few hours . If you sightsee, it's easily all day.
I like to ride to the Natnl forest and set up camp on Friday evening. Then ride around the area exploring on Saturday using some version of this loop. Once familiar with the area the route choices seem endless. Sunday morning pack up and head home. Home by 1:00.

Advised to check my directions on a map or GooGoo, as most of this is from memory .
Enjoy .
G

A nice road trip.. rt 30 out of Manchester , head north (northwest) to to 73 west . cross to NY via the Ticonderoga ferry to the fort. Then head north along the lake to the Champlain Bridge (various routes Bring a map). Cross back to VT and head east on rt17. Cross the Gap to rt 100 and head south to Londonderry then take 30 south (west) back to Manchester.

Watch for speed traps on approach to the Champlain bridge! Last time thru I got warned by headlight flashes- boy the state popo were there and waiting.

gpounce said:
Watch for speed traps on approach to the Champlain bridge! Last time thru I got warned by headlight flashes- boy the state popo were there and waiting.
Click to expand...

Ha ha.. Back in the early '00s I would do an annual ride around the state with some older friends who were all ex racers and trained riders but well into their 50's . Mostly on big Beemers but a few had sport bikes. After leaf season but before snow the trips were great , but we (they) rode like A-holes. No speed limit ,or passing zone was honored. But Man was it fun, and riding behind trained riders really ups your game.
Anyway.. Up the west border, over the gaps ,Lunch in White river, down the east border. We didn't ride as a pack so we could get a bit stretched out. I'm about mid pack coming into Okemo (Ludlow) and I'm following an ambulance. My buddy is well behind on his yellow CBR RR. As I pass Okemo there is a statie on the roadside as I pass. The next two guys pass also. Here comes Sweeper John and the statie gets out of the car and waves him over. ( I mentioned the yellow RR but did I mention is Purple leathers?)
John ( about 5'4")shuts his bike off and starts walking to the cop car( looking like the great grape ape) and as he is unzipping his leathers to get his reading glasses out, His beer belly sort of falls out. He takes off his helmet to a head of grey hair. The woman officer looks him up and down and yells " You should know better!!"
She then ran through a list of all of our bikes and told him the party is over . If they see any of the bikes on the road for the rest of that day tickets will be coming.
She scolded him hard about 2 of the bikes passing the Ambulance. Then Explained that they try to be lenient (and they were) but this was a late leaf season and tourists were still out.
Ir really gave me a respect for Vt's finest. I'm sure that if I ever get a ticket there. I Earned it.

CroMag 2011 where the decision was made to turn around and go back. 9 miles in 8 hours. Good times. I have no idea where were. 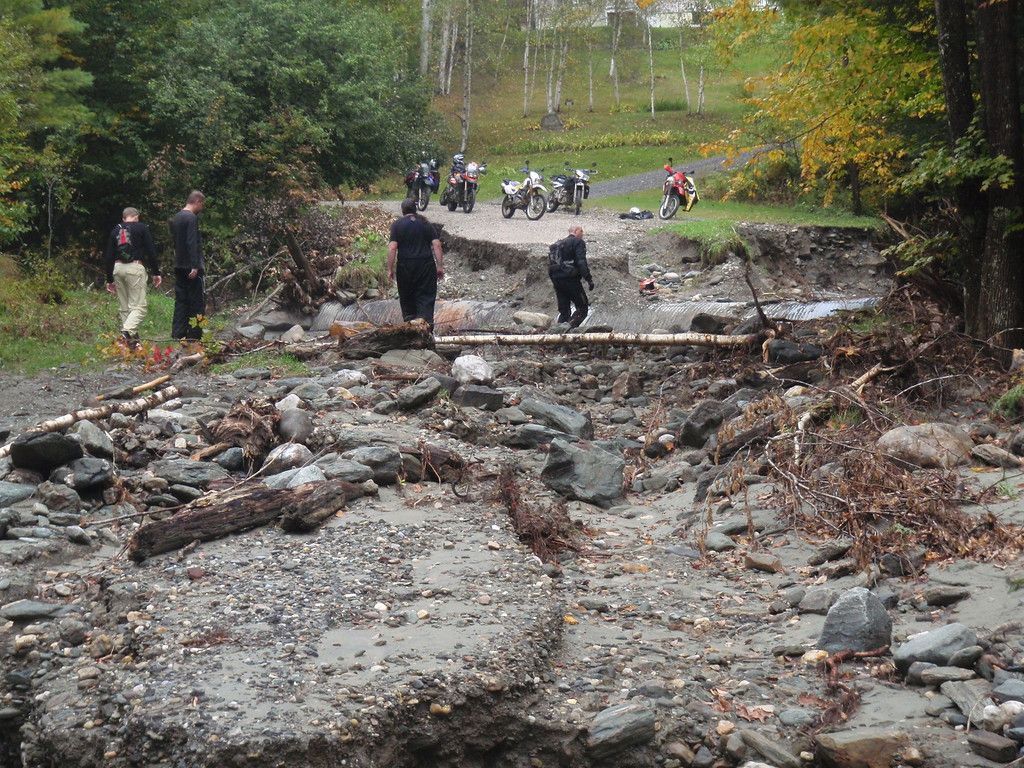 skibum69 said:
CroMag 2011 where the decision was made to turn around and go back. 9 miles in 8 hours. Good times. I have no idea where were.


I've got a picture of my DR next to a sign that's like 10' showing where the water line was. 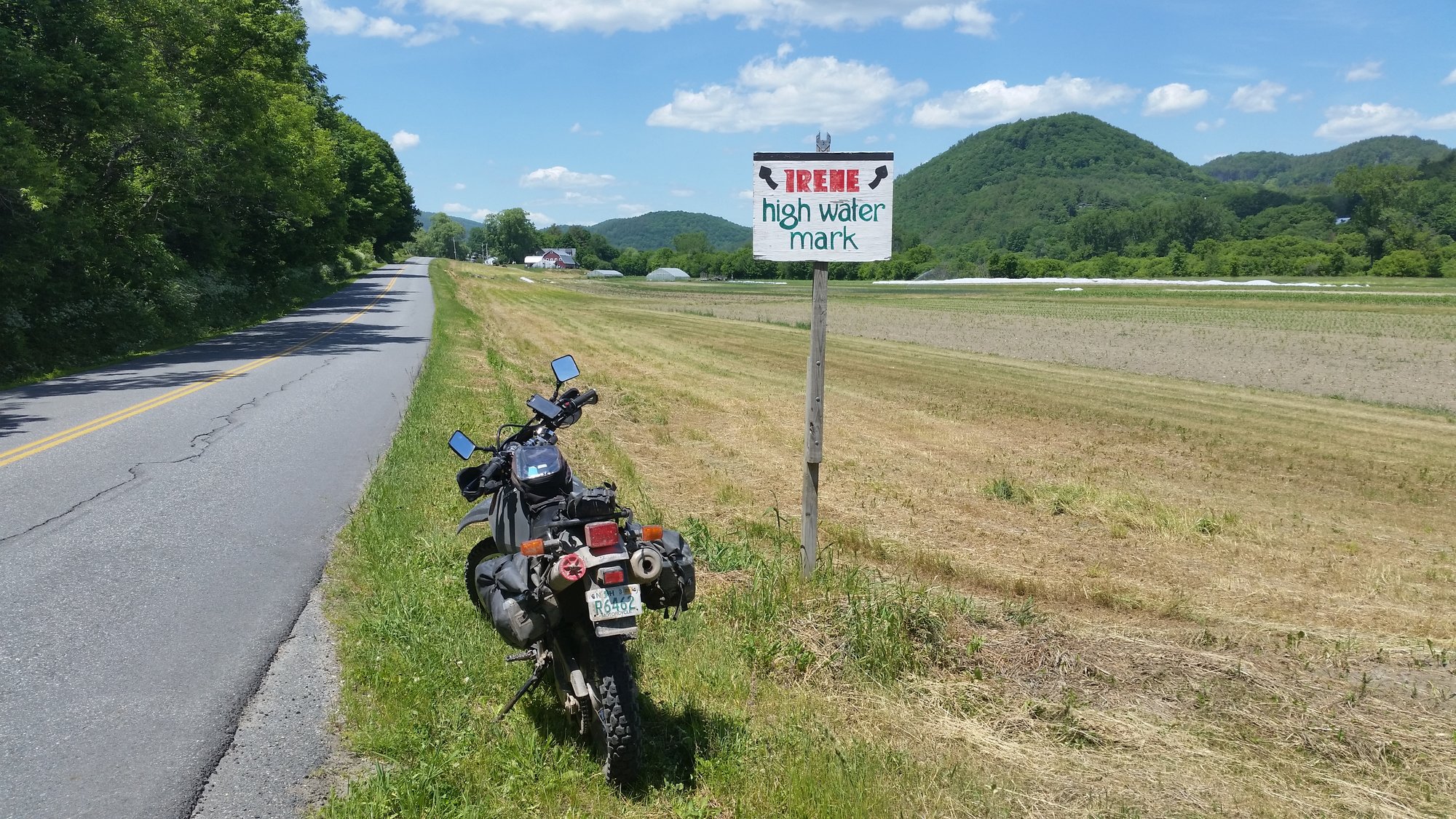 Yup, we rode through a bunch of washouts on that ride. Plenty of damage around.

Yup, I live in one of the towns (Rochester) that was completely cut off due to road washouts. Interesting times. The locals really stepped up to get temporary repairs done so we could get around again. We had several local DS riders that made their way thru the washouts to get vital medications for residents.

I'm lucky to have lots of great riding in any direction right out of my door.

skibum69 said:
CroMag 2011 where the decision was made to turn around and go back. 9 miles in 8 hours. Good times. I have no idea where were.

That's a vermont road. Lots look like that this time of year. I'm leaving soon, I'll post back what I find


I've got a picture of my DR next to a sign that's like 10' showing where the water line was.

One of the picnic tables at Wahoo's has a plaque on it bragging of it's distance traveled (and returned) during Irene. Crazy times

We saw plenty of damage on that trip.

Question.. Last season there was a new gate at the south end of the Somerset Airfield. It when closed would shut off the Airfield to parking access. Does anyone know if that gate has been used (or is being used)?
I am hoping to spend a few days up there next week and would like to camp at the Airfield

It seems an odd placement for a gate to close off the Sled parking /bathrooms. but when I asked last fall nobody had an answer as to why it was put there

Did the Puppy Dog ride twice thanks too the route laid out by the Vermont bmw club..they have others posted also..Puppy Dog is length of Vermont . From Mass border to Canada on dirt roads ..
https://bmwmov.club/rides/

Bikerboy108 said:
Did the Puppy Dog ride twice thanks too the route laid out by the Vermont bmw club..they have others posted also..Puppy Dog is length of Vermont . From Mass border to Canada on dirt roads ..
https://bmwmov.club/rides/
Click to expand...

I'm going to shoot for this ride with my Dad this year.

edit, to follow up there a lot of options for camping? stealth or campground?

woods said:
I'm going to shoot for this ride with my Dad this year.

edit, to follow up there a lot of options for camping? stealth or campground?
Click to expand...

There are actually 2 distinctly different "Puppy Dog " Rides ..the classic and the current .. They run close to a few state parks and 100's of stealth camping..ALSO the MABRdiscovery route runs thru VT.. BUT didnt do that .. The puppy dog.. I did on my 2005 1200 GS and then my 2018 GSA ..98% great one or 2 spots where it was up on the pegs and Don't let off on the throttle.. BUT LOTS OF FUN.. took us 3 days and if memory is still there 360 + - miles go to the site and download the rides and see which one works for you and Dad
You must log in or register to reply here.
Share:
Facebook Twitter Reddit Pinterest Tumblr WhatsApp Email Share Link