I never progressed into the digital age after the old SLR days. I tried a couple of cameras just snap shooters but come the days when phones got cameras, i simply never perused it further.
I am always on a low budget and will be looking for older cameras and go pros.
Any info from those of you knowledgeable in the dark ark of photographic stuff, and who are kind enough to offer advice on this subject then please do.
Will use for photos like i used to on the old SLRs years ago. I know phones these days have half decent cameras on them, but again phones i am a cheapskate and i am running my old circa 2017 sony Z5 premium to destruction, so not sure its camera will be up to the task , but i know its got heaps of setting i wont pretend to understand and never ever use the aoto setting is about it from me i am afraid.
All help greatfully recieved, and i wil promise to pay attention to advice given, and try and learn from it Thanks in advance Matty Armstrong.

I know some people prefer to use phones to take pics but I am a big fan of actual camera's. I started taking pics for ride reports with a digital camera I bought back around 2005. It was a 4 MPX casio that took pretty good pics. I attached it to a strap around my neck so it was always ready for use including taking pics when riding. Eventually it got grit in the mechanism and stopped working. I bought another cheap point and shoot but it jammed up the first dusty dual sport ride I took it on. I replaced it with an Olympus TG830 which was waterproof, dustproof and shock resistant. I was very happy with it but after a few years it crapped out. I would have bought another TG830 but it was no longer available. I ended up replacing it with an Olympus TG5. This is a pretty expensive camera but it takes great pics. It has way more features than I know how to use.

My recomendation is to get a waterproof camera. They are designed for action photography. You don't have to put them away in the rain and they tend to be rugged. Some are fairly inexpensive even when new. They won't take the same quality pics as a DSLR but they are much more convenient to use. I think that 90% of photography is being in the right place at the right time and pointing the camera in the right direction. This is easier to do with a smaller camera.

I also have a bigger camera, A Sony Cyber Shot DSC-HX300 which has a really good lens with a 50X optical zoom. It also take great pics and is much cheaper than a DSLR but I rarely use it because my Olympus is much easier and more convenient to use.

One thing to consider with any camera you buy is can you operate it with your gloves on. I can take pics with my Olympus while riding and wearing my heaviest winter gloves. I only use two buttons when riding, the on/off button and the shutter button. Even if you don't want to take pics when riding it would still be nice to pull your camera out of your tank bag or pocket and snap a pic without having to take off your gloves.

A number of years ago I had a point and shoot waterproof that worked fairly well, but I found that I still wouldn't stop to take the picture and if I did I could get some decent pictures but the keepsake kind, not Photographs. so I split in two directions, A helmet mount action cam and a good quality DSLR. I had found that Video really doesn't do anything for me as it really doesn't pick up terrain well. Everything just looks flat. So I settled on a Sony action cam because it
A. took stills.
B. It had a remote trigger set in a watch type screen that I mounted within thumb distance on my throttle grip. It was great and got a lot of nature shots that I couldn't get with the DSLR.
Once it disappeared I replaced it with a GoPro 5black with voice trigger and time-lapse It's a great piece of kit.I attached it to my chin bar so I can tell it to "take a photo" and it does.
As for the DSLR I bought a Pentax KS2 . It has a rugged Metal body , is waterproof, and has WP lenses available in a good many configurations, it also has wifi so can be adjusted and triggered with my Cell phone, Great for night shots at camp.
It sits in a tank bag and is easily grabbed Once stopped and has really helped me to slow down , stop and take in a view. A lesson that I most certainly need.
I have taken some 50+K photo's with this set up and I have to say that I am really darn proud of about ten of them.. LOL
Kidding aside a good DSLR is a great piece of kit and Photography ,like riding a Moto is one of those things where the more you learn, the less you seem to know. Improvement is the goal. 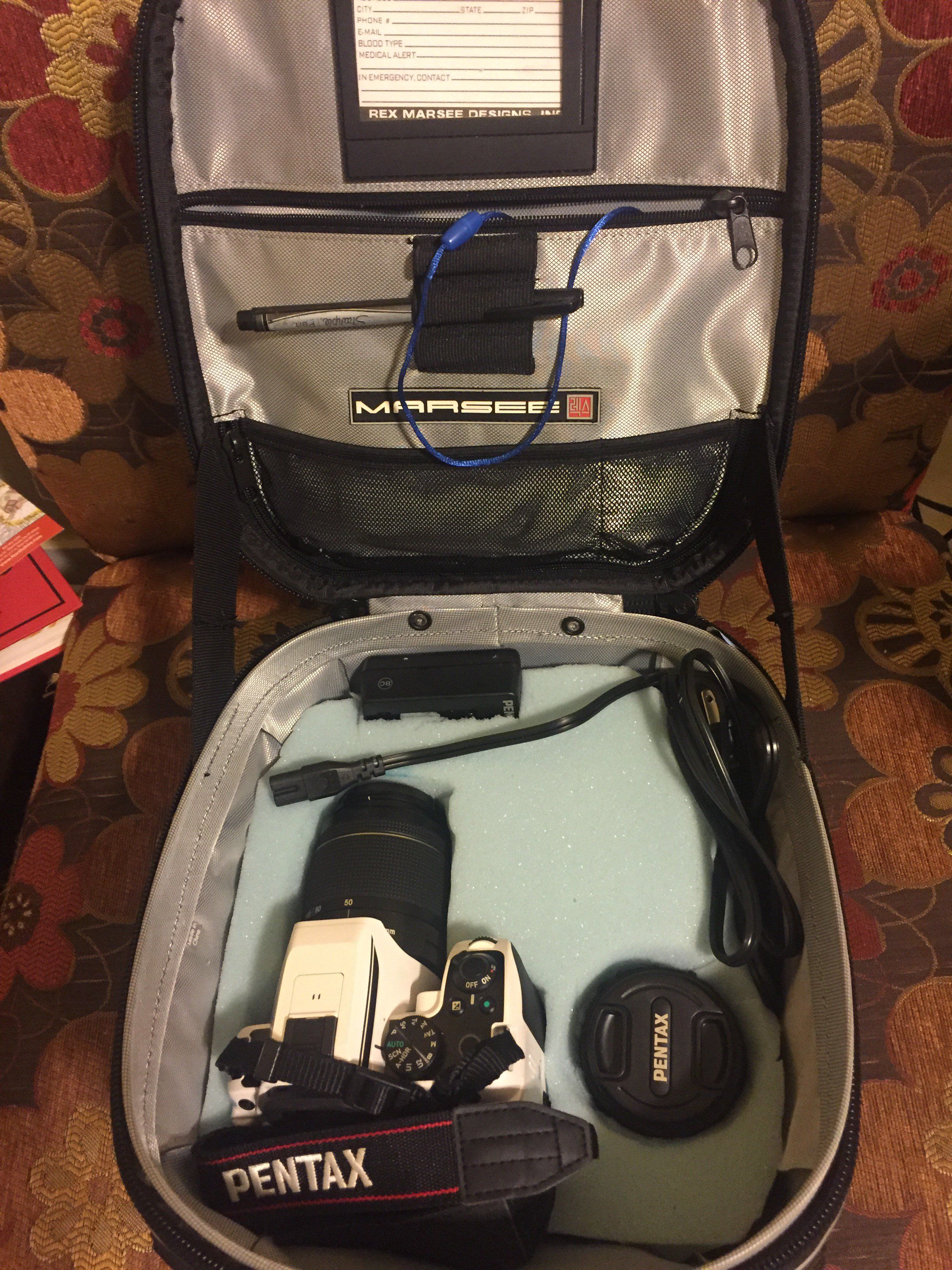 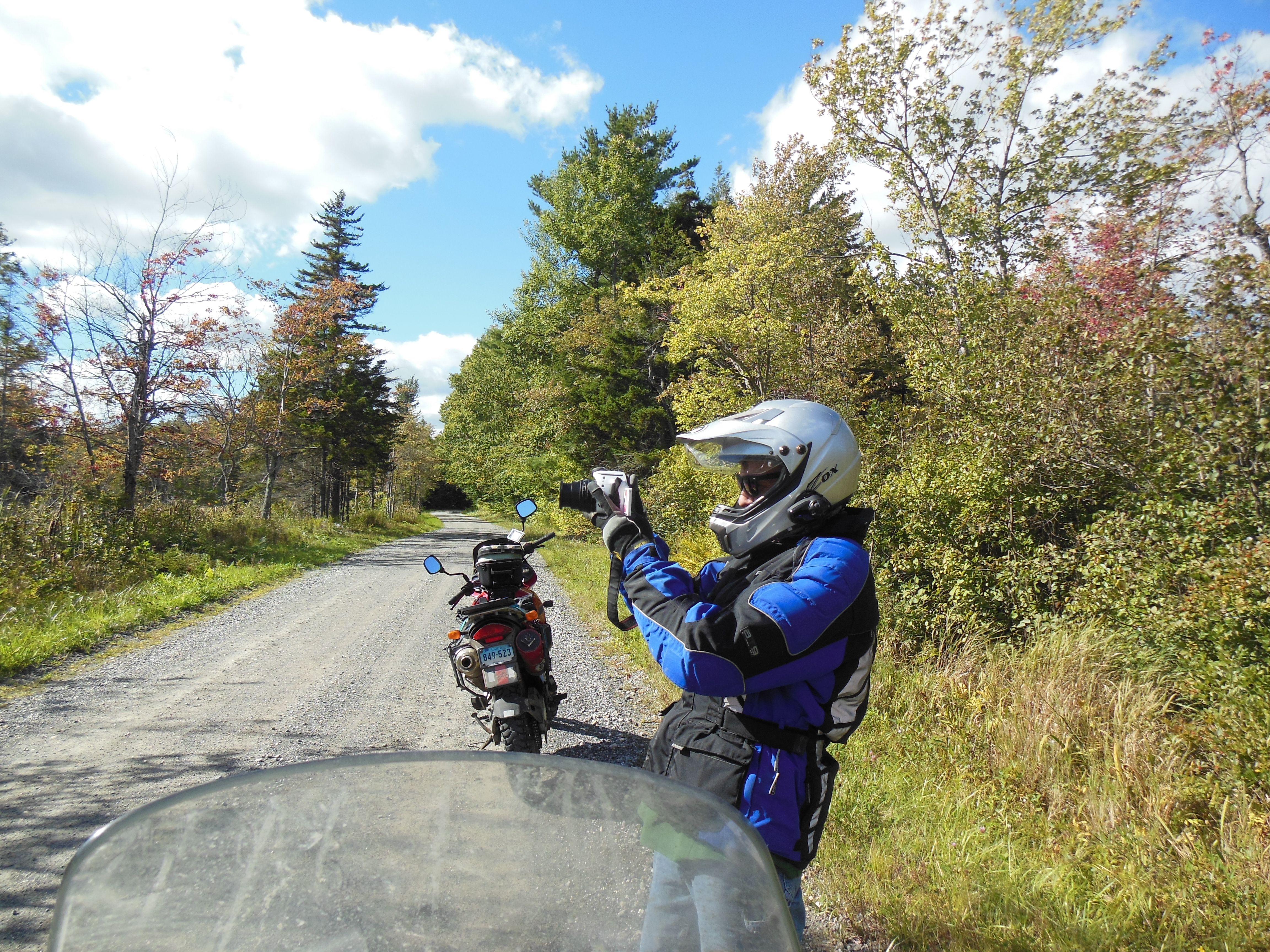 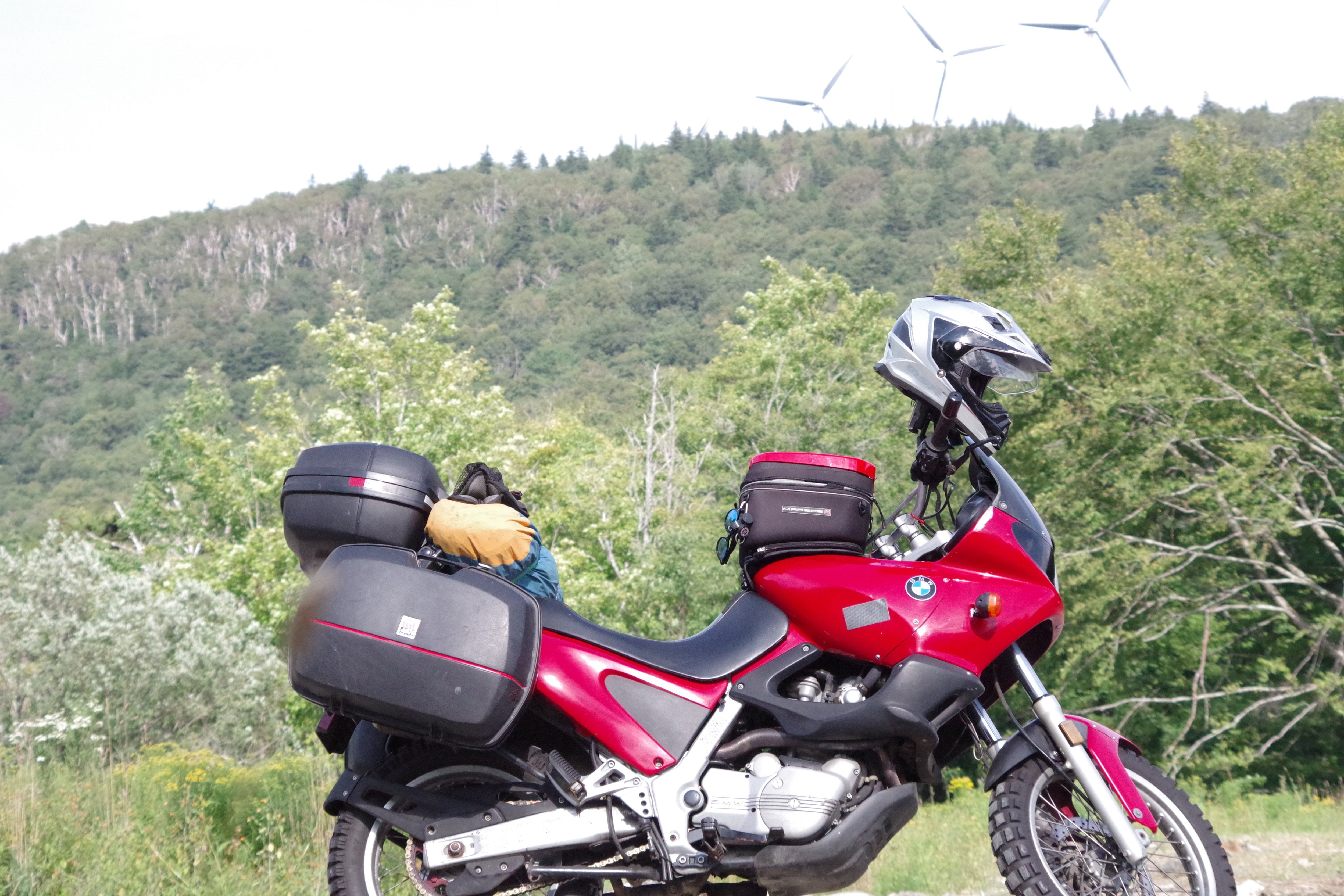 I'm on a budget too so I can appreciate the spirit of the OP's thinking. I (still) have a Canon AE-1 SLR film camera with power winder and 200mm lens bought long ago, but my wife and I bought an inexpensive Canon digital about 10 years or so ago and it still works great. However, that was before the mega-leap in phone cameras and now I almost strictly use my phone. I know, you're thinking a high-level android or iPhone but no, after my nearly 8 year run with a Samsung Galaxy S5 at $600 paid for by a 2 year contract with AT&T, due to the upcoming 5G change I knew I didn't want to spend what the equivalent phone would cost now since I don't want to be in a contract (we're with Consumer Cellular, 3 Gb of data shared between my wife and myself, all else unlimited for $52 a month for both) so you have to buy an unlocked phone when you want a new one and I'm NOT spending $1000 or more.

So, I spent some time researching and bought a Samsung A42, 5000 ma battery, all the usual features of the latest Android OS, nice spam call identification/blocking through HiYa and a 48 MP main camera that takes nice, big resolution pics (8000x6000) for the decent price of $429 (and I got $100 off the price when I bought it for signing up for an Amazon Chase Visa, literally only took 5 minutes with a credit score of over 800) so my end cost was $340 including a new case with belt clip for it. The depth of field with that resolution is stupid, some of the pics I take are as big as 25 Mb each. I'm living rural so my only available internet is DSL at 15 Mb down and 768k up, so I always have to reduce the pics to half the resolution to be able to upload them without waiting 20 minutes. It's the best budget new phone I've ever owned, and if you wanted to go even cheaper my wife's new A13 has the same 48 MP camera for $249 and Amazon will drop $50 off it if you sign up for their Chase Visa.

I also have an old GoPro Hero 3 from 2014 and it still works great. 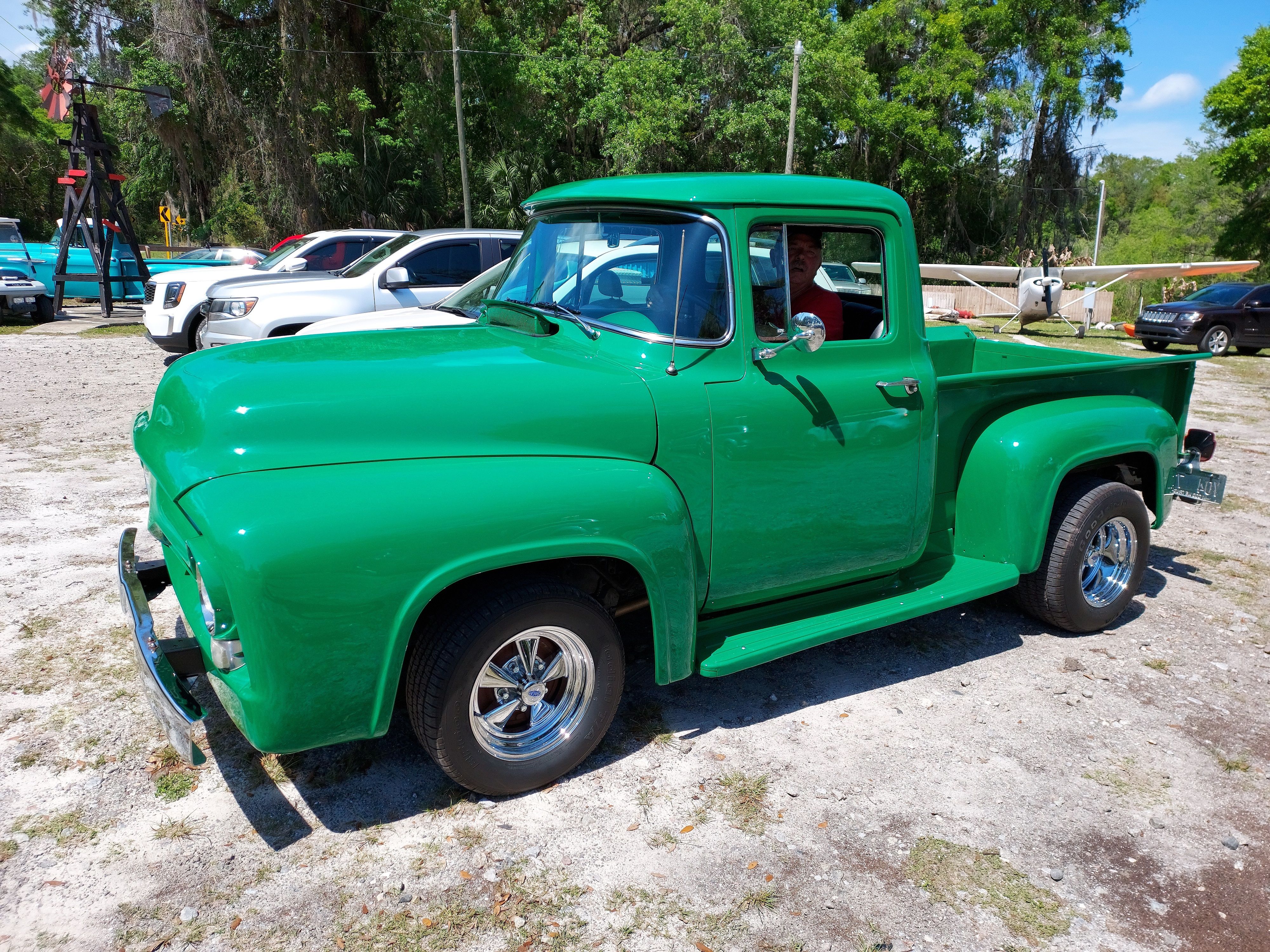 A few years ago I bought a Fuji Finepix XP90 as a GoPro supplement. Editing video sucks so I would set my GoPro to take a picture every 30 seconds. Then I need to sort through a thousand pictures to find 10 good ones. A carpet bombing approach if you will.

The Finepix I mount on a Gear Keeper on my jacket or backpack and take pictures as needed of which 90% are good pictures. The sniping approach.

Yeah, I have to say I'm not fond of video editing either but it's just time consuming, not really difficult. My older GoPro came with decent editing software that apparently is discontinued, but I like it and have learned enough to use it decently. I don't go for any special effects, just an occasional caption and I let the bike do all the talking.
You must log in or register to reply here.
Share:
Facebook Twitter Reddit Pinterest Tumblr WhatsApp Email Share Link