Is it priority or am i just cheap.Or WHAT?

64 years on this planet, and i am yet to own a brand new motor bike or car/ truck.
Had new Guns but proportionately most or them are secondhand .
Newest bike i have owned this last decade was a 2016 tiger 800XCX, it was off my nephew and was when i got it third hand( Now sold).
I own my own place Family owned farm house, on the same land my direct ancestors have owned for well over 200 years, and although not rich nor have i ever been a professional or ever in a mega well paid job as such. i / We have always been busy industrious at times wheeling and dealing and a few livestock etc as well as working more or less constantly in my adult life.
History lesson out the way and???
How is it i just can not see my way, as in just could not warrant in my mind to buy a new bike and most certainly a new car or truck.?
Its not so much the costs involved the New purchase Hit / Loss, in a way thats not a factor directly as i ussualy keep things a long time, and even the older tat i run and ride are well past their sell by date when i kill them and dispose of them(mostly referring to cars here).
Besides the price point aspect, i genuinely never seem to hanker after the latest and greatest of anything, and often the shining newest models just leave me cold much of the time. Its rare i sort of want a new bike, i think the last bike i acctualy wanted quite badly when new out was The yamaha SR400, (Still want one just not found one i must have yet).
Cars and trucks, my curent desire is for a user daily beater 2014 2.0 JTD Diesel Alfa romeo Gulia to replace my curent daily runner Vauxhall astra estate car 1.7 CDTI . Preferably before september the 1st so i got it for this next seasons waterfowl hunting to chase geese up and down the country in.
I Look at the £70 000 £80 000 new cars and not only do they do nothing for my soul i just wont ever consider owning such a thing. I mean not even a new bike, its simply not on my radar i want older stuff , and its always been like this with me and her indoors as well. I remember back in 1980 my father saying i should buy a new Nissan bluebird diesel for £5 750 IIRC on the road with 6 year waranty. I bought a 1971 Peugeot 404 estate to go with my 1951 lr series 1 i bought for £50 in 1973 as a 15 year old kid and coverted myself to diesel fiting a 1500 BMC engine in it from a Austin J 4 van i paid £30 for and scraped for £10 with the old LR petrol engine in the back. he series was £70 and my time i had that until the mid 80s.
A WWw pic with the exact same type and even colour cars we had when first maried. 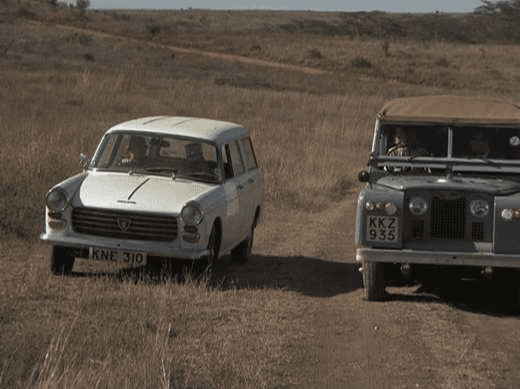 I could relate similarly to bikes i just never wanted new shiny stuff.
Are you into the used or a must have new person, ? Am i just a cheapskate with different priorities to what seems to me to be prety much the whole world these days.

I've had 48 cars, 41 motorcycles and 4 houses. 7 new cars, 5 new bikes and 2 new houses. More importantly than new or used us value, perceived or proven. Your methods meet your needs. No need to over analyze it.

Matty, you and I are cut from the same cloth I believe. I think for some it makes sense to buy new and I appreciate those that do. Without them you and I would have nothing to ride/drive.

You are not cheap but smart. It's easier to make a spender out of a saver than it is to make a saver out of a spender. Count your blessings that you married someone with similar values. You are content and a good steward of your resources by repairing things and getting the most out of them. You have arrived and don't realize it !

My wife and I have a similar situation. I'm conservative by nature yet the hypocrisy from some activists constantly reminding me of what a sh^tbag I am while they consume away with the latest greatest impulse purchases on amazon or whatever the internet is telling them. I'm a bigger greener than they are! I digress...

You could easily buy something nice for yourself because you have an internal safety switch that keeps you from over spending. Count yourself blessed.
Last edited: Jul 8, 2022

matty , you owe it to yourself to try a modern car with the bells and whistles, I didn't know what I was missing

I am more of a buy new kind of guy. It's not that I need or even want the latest and greatest. I tend to keep my cars and bikes a fairly long time and prefer to know the entire history of the vehicle by being the original owner.

I have bought used bikes and cars with mixed results. Some worked out great but some had a lot of issues. I prefer riding over wrenching which is one reason I prefer to buy new. If I was a better mechanic I would probably be more likely to buy used.

klaviator said:
I am more of a buy new kind of guy. It's not that I need or even want the latest and greatest. I tend to keep my cars and bikes a fairly long time and prefer to know the entire history of the vehicle by being the original owner.

I have bought used bikes and cars with mixed results. Some worked out great but some had a lot of issues. I prefer riding over wrenching which is one reason I prefer to buy new. If I was a better mechanic I would probably be more likely to buy used.
Click to expand...

My tendency with bikes is old project bike or new/used/never modified.

To many hapless wrenches on most used bikes for me.

I would not class myself as a great motorbike mechaqnic, i do ok and have done some prety complete builds from parts my third trident T150 was bought in plastic dustbin the mechanicals and bolts etc and the wiring ansilaries etc were in carboard boxes and dog food sacks. yet i got it refinished and up and running in under two month which for me is record time i generaly take 6 month to a year minimum and some jobs can linger on into the years quite easily. Motivation on bikes can kill a project for me, i think knowing Tridents and triumphs generaly help get the job done re motivation, and once it starts to come together its really suprising what you can do on the older simpler bikes.
I am no expert on wiring, but i get by fine much of the time in my slow and ploddy sort of way.

After a few cycles of settling for something other than what I wanted/needed, I came to the realization that in the long run it is cheapest for me to buy new, buy exactly what I want, maintain it well, and keep it for a long time.

Our two ATVs are 9 years old, our two motorcycles are 5 years old, my truck is 8 years old, and my wife's SUV is the newest at 3 years old (it replaced a 12 year old car, that my daughter-in-law is now driving, and still going strong at 15 years old). I have no plans to replace any of the above at any time in the next 8-10 years. All of them are paid for.

I've had eight new wives. Well I guess not really new, most of them were used. So needless to say, I can't buy anything else new.

2whlrcr said:
I've had eight new wives. Well I guess not really new, most of them were used. So needless to say, I can't buy anything else new.