Ready to retire and ride even more!!

KTM 525 EXC, One of the best do it all KTM RFS motor years made (produced from 2003 to 2007). Early model year issues have mostly been resolved and 2007 was the last year for the model. Unlimited power with lots of torque from idle to red line! Claimed weight is 247 lbs. A true KTM powerhouse!
Here's my 2006. 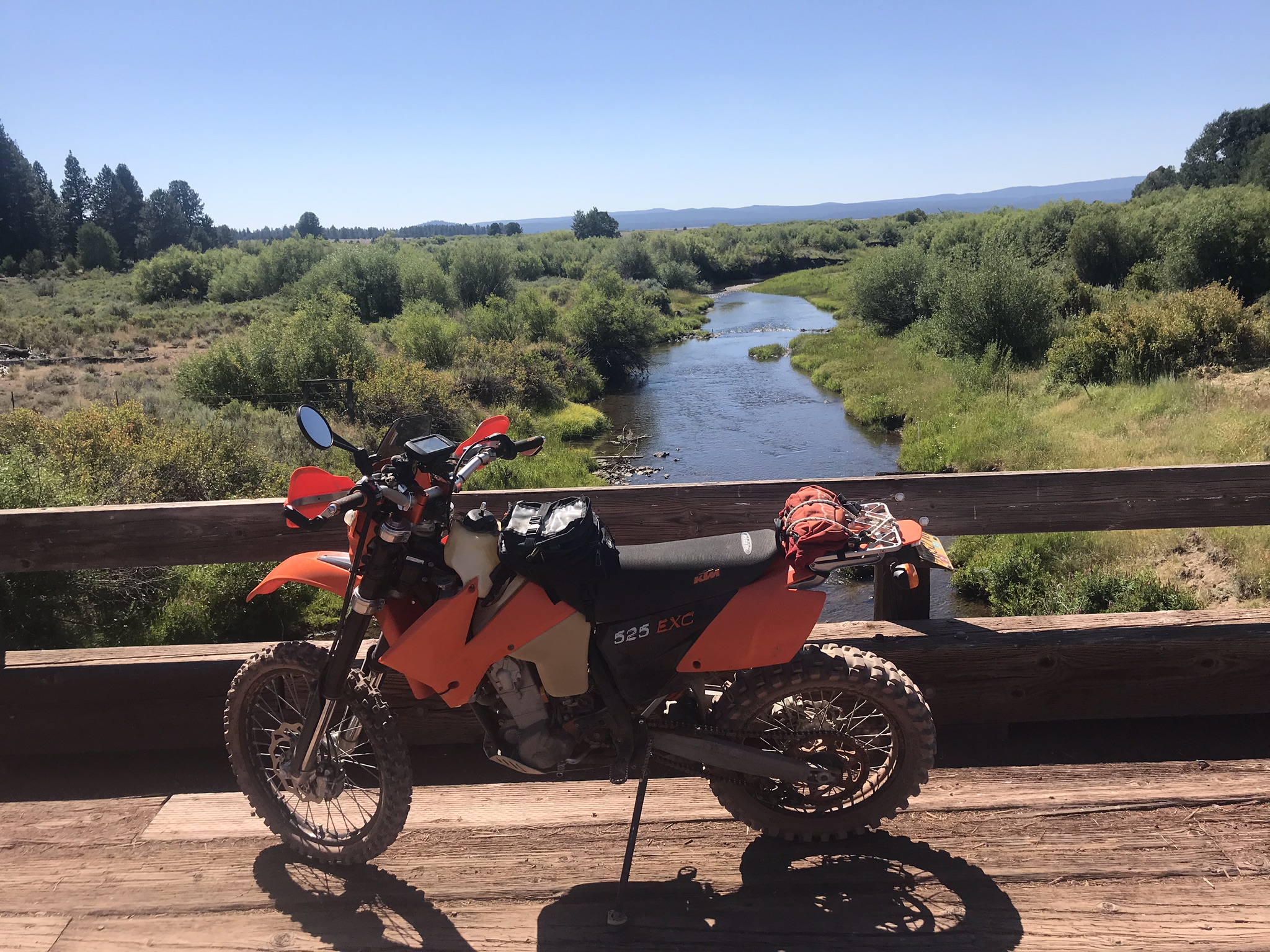 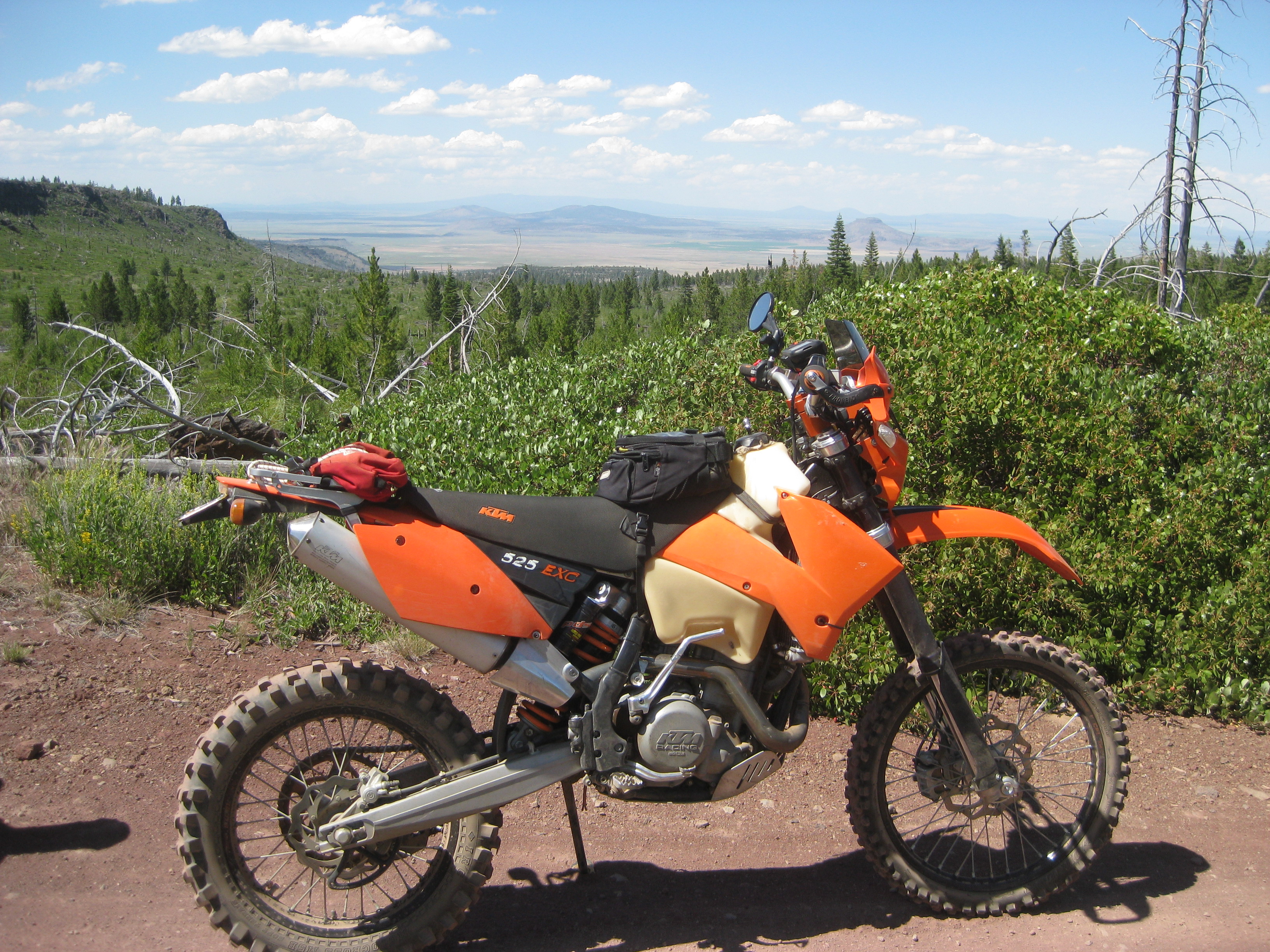 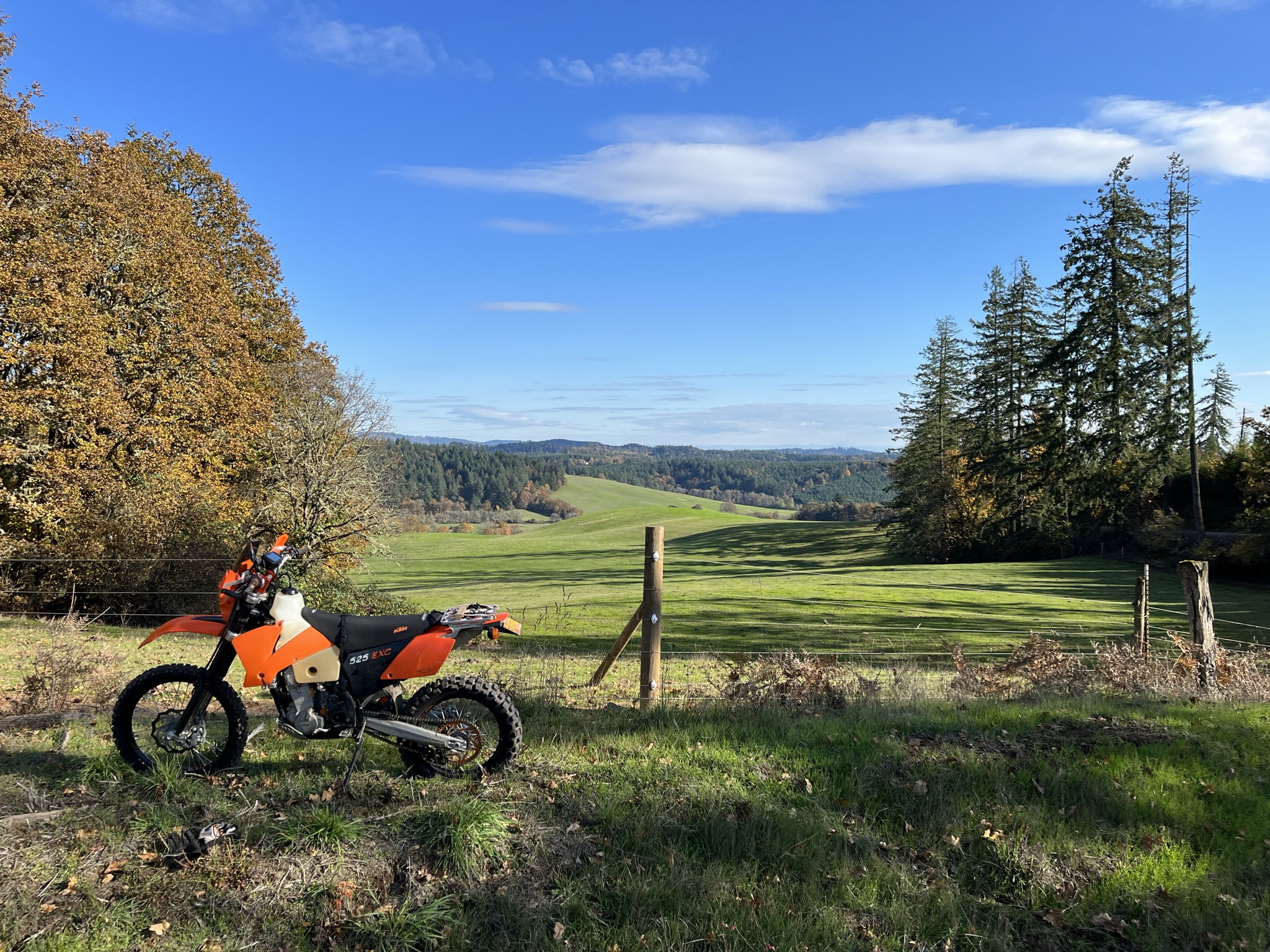 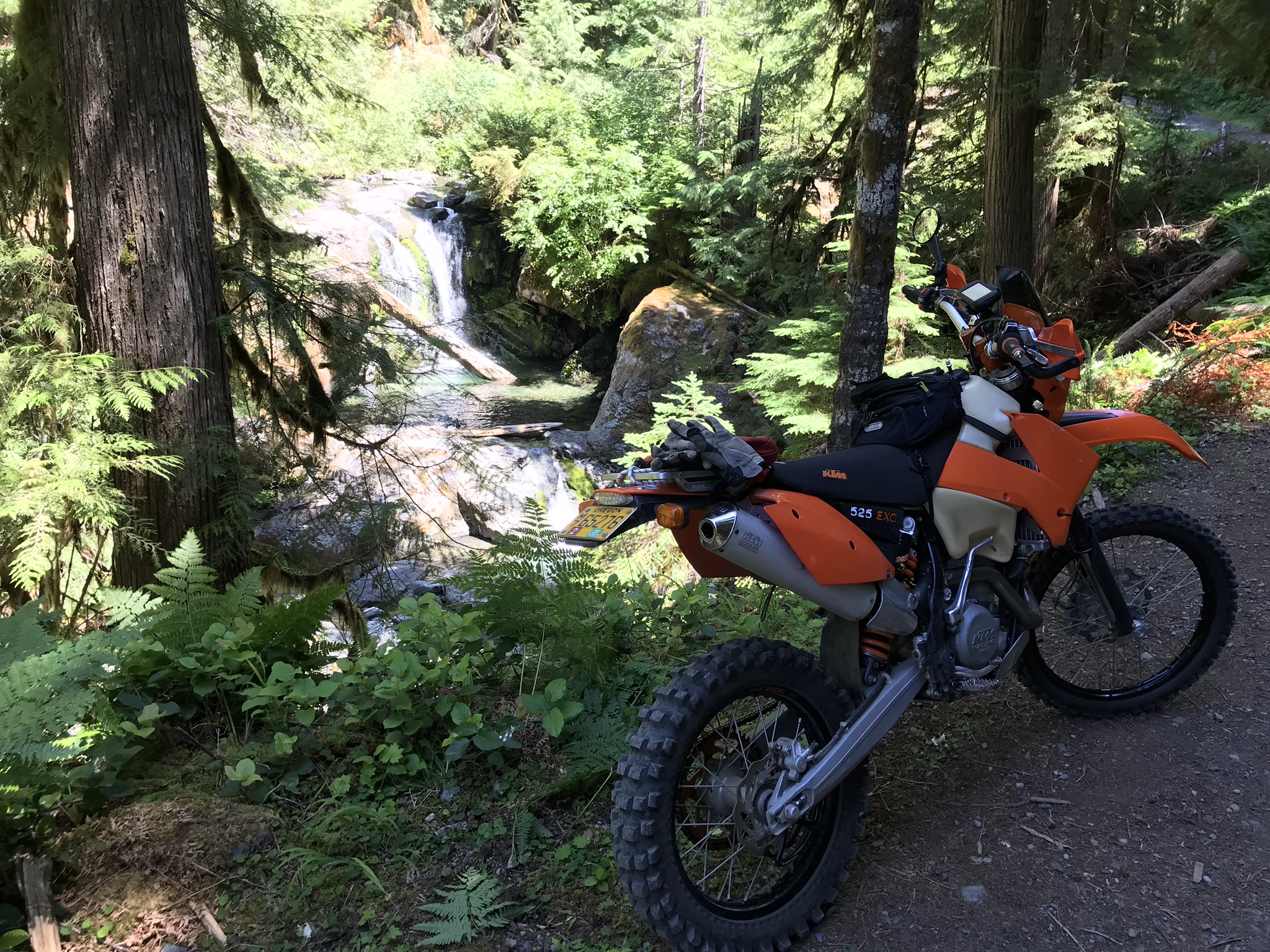 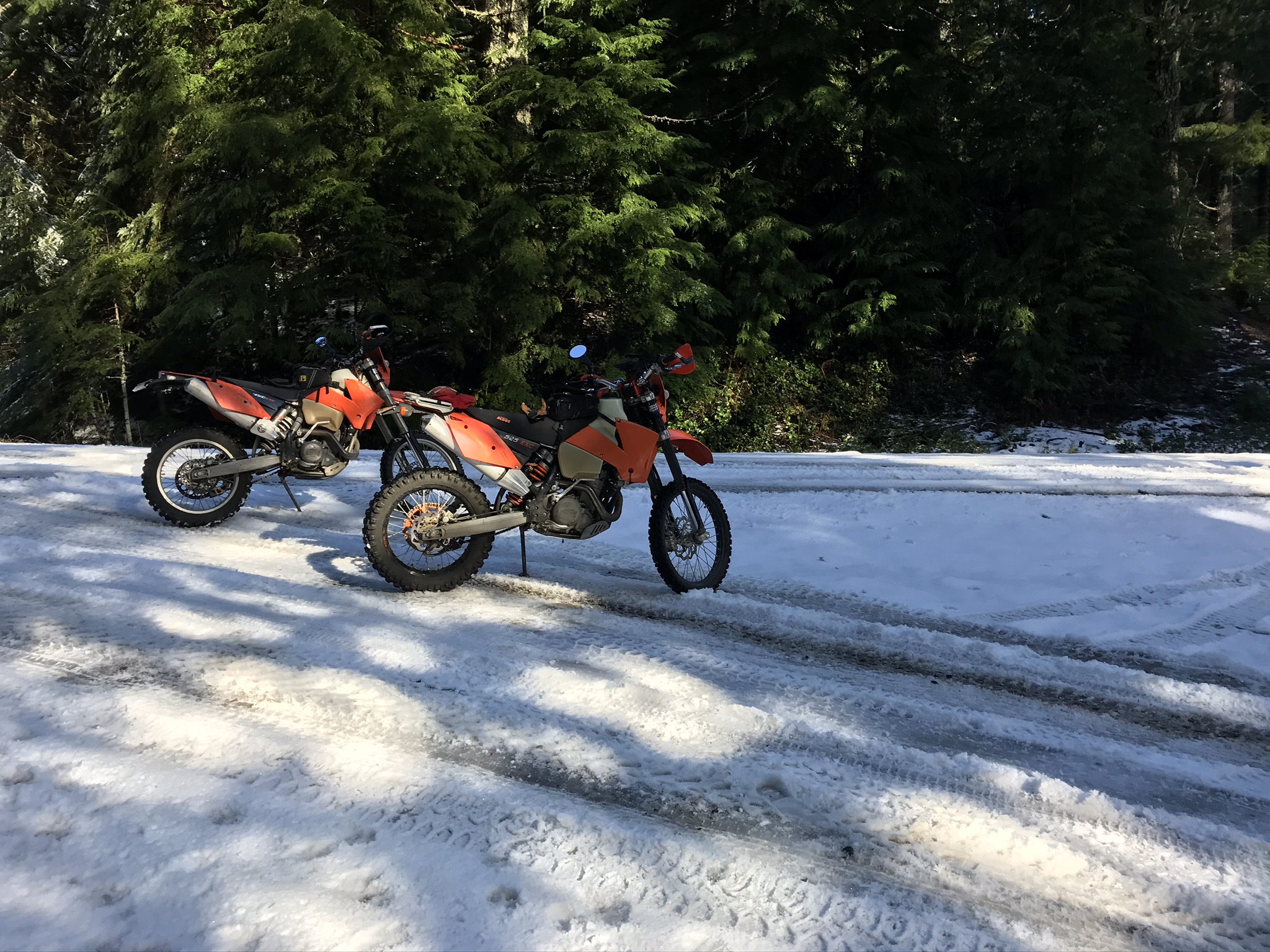 Here's my '07 XCW. This build was for the '08 Dakar, it went to Portugal but with the cancellation it was never raced. The MECA kit was sold to a guy in Uruguay, some days I wish I'd kept it. 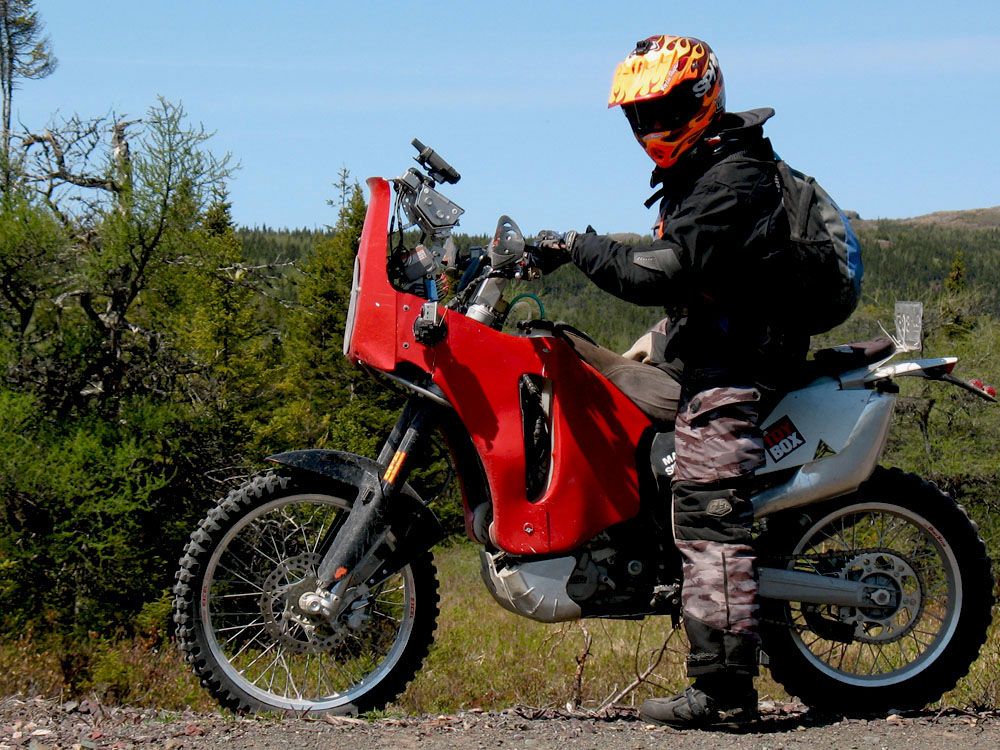 Back to mostly stock. 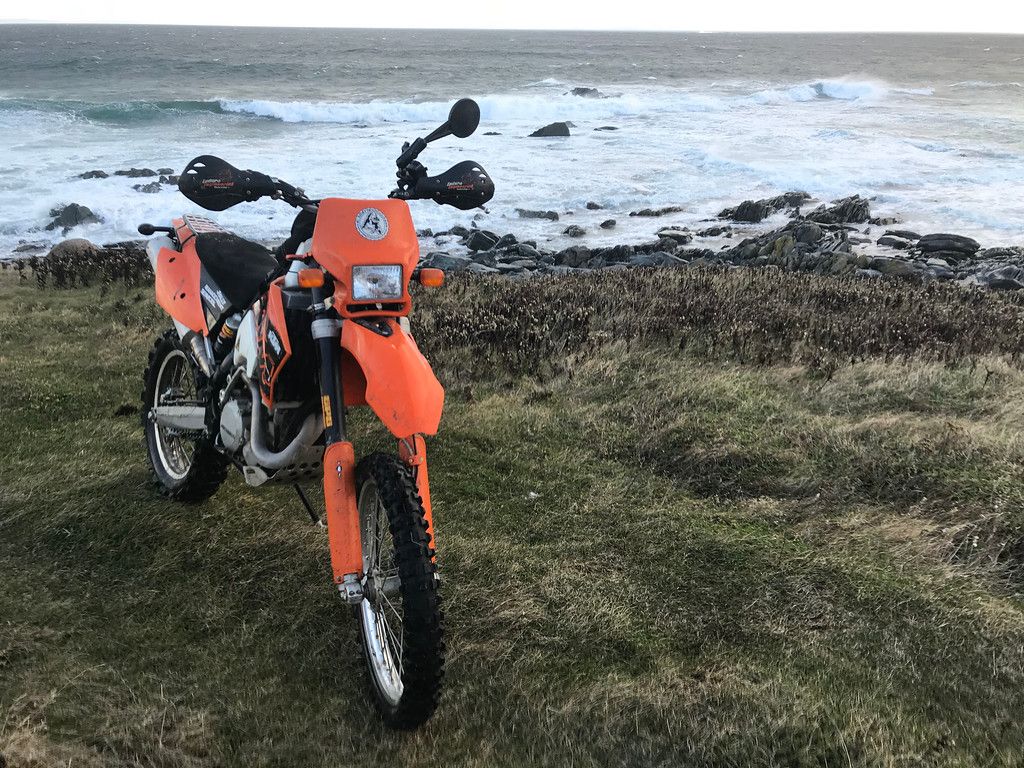 Now I'm struggling putting the new EXC wiring harness on. New fairing and gas tank. Looking at getting a 6.6 Acerbis or maybe a 4 Safari for it. 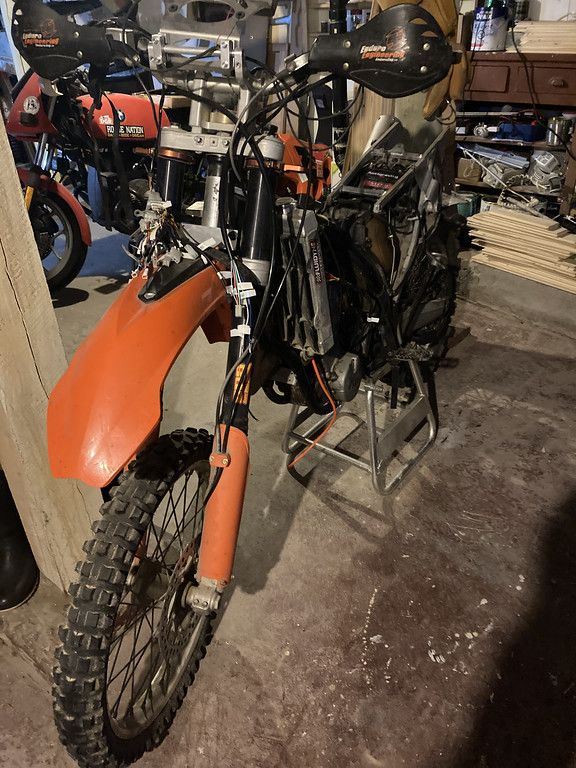 An 08 lens and mask work great with a Cyclops LED bulb. Plus the 08 front fender is a nicer part than the old style.

My only issue was having to install the LED bulb upside down from how it went in the triangular lens for the cutoff to work. Once I figured that out, it's a great setup with the adjustable lens.

Anyway, the 08 front end treatment along with a Baja Designs inner fender and LED brake/tail light make it look a lot less like the dinosaur it is. Location
Stuck in the 80s

BackCountryCruizer said:
KTM 525 EXC, One of the best do it all KTM RFS motor years made (produced from 2003 to 2007). Early model year issues have mostly been resolved and 2007 was the last year for the model.
Click to expand...

While not being named the same, the 520 motors are identical to the later 525s. The RFS motors were introduced in 2000 and except for a few minor updates they were largely unchanged until KTM stopped using them in 2007. Of note is that Beta actually used the KTM RFS motors in some of their bikes up until 2010 IIRC.

I love the RFS motors, very robust and with nothing more than good stainless steel valves (I run Kibblewhite) they can easily go 500+ hours with just regular maintenance.
The 520SX while being mechanically identical (except for the early SX heads) is a beast. The ignition is very agressive and the motor definitely has more grunt everywhere than the 525. It also has 4 gears, 2 of which never get used on an MX track. At least not with my limited abilities.

I once had Dave Hopkins build me a very potent 540 using the 05 motor as a base with an early SX head (flows better). It had oversized Kibblewhite valves which were unshrouded for better performance and it used an 8/33 cam. The result was spectacular. The high comp 540 kit mated with the 8/33 cam cancelled out at low RPMs so it felt pretty much stock off the bottom which is to say, just like a tractor. But then it got on the cam in the mid-range and instead of signing off around 7500 RPM like a stock 525 it just kept pulling to the rev limiter. With trail gearing I saw 185kph (115MPH) a few times before backing out of it. And therein lies the problem with the RFS motor. It does not like sustained high RPMs. The lighter SX cranks with roller bearings (SXS and SMR models) could handle it but the heavy EXC crank with roller bearings are ill-suited to that purpose. I completely destroyed that motor chasing the ton on gravel. I a valve seat let go and that was all she wrote.

My 525EXC was/is plated but it was getting long in the tooth as a dual-sport ride. I replaced it with a Beta 500 RR-S. The Beta is a short-stroke motor and is happier spinning fast but I kind of still like the 17 year old RFS bike better in many ways so I doubt I will ever get rid of them. They truly are race bikes that you can just ride and put away wet.

Love the torque of my 520. The bottom end hit is just pure fun. Makes my WR 450 feel like there's something wrong with it 😁

The claimed 247 dry weight is baloney. My 02 is bone stock other than a number plate in place of a headlight. Showed 276lbs on my scales full of fuel. Within two pounds of the steel frame WR.

Location
Stuck in the 80s

Shinyribs said:
Love the torque of my 520. The bottom end hit is just pure fun. Makes my WR 450 feel like there's something wrong with it 😁

The claimed 247 dry weight is baloney. My 02 is bone stock other than a number plate in place of a headlight. Showed 276lbs on my scales full of fuel. Within two pounds of the steel frame WR.
Click to expand...

I agree. My 05 also came in at 276lbs (with a full XC tank and all the street stuff) on my cheap 2 scale weighing method.

Slowly getting closer to getting mine back on the road. Waiting for the new 6.6 tank to arrive.

Ah ha! So this is where the 525 boy's went! Here's my '04 barn find after spit shining and some refreshing. She's got character and been around the block a few times, there are many like it but this one's mine. This pic was taken while getting things sorted and still had the tires from 2006... it sat for years. I sold a '05 450 EXC in 2010 now I'm basically back where I left off. Time capsule, I like the RFS, torque is your friend! 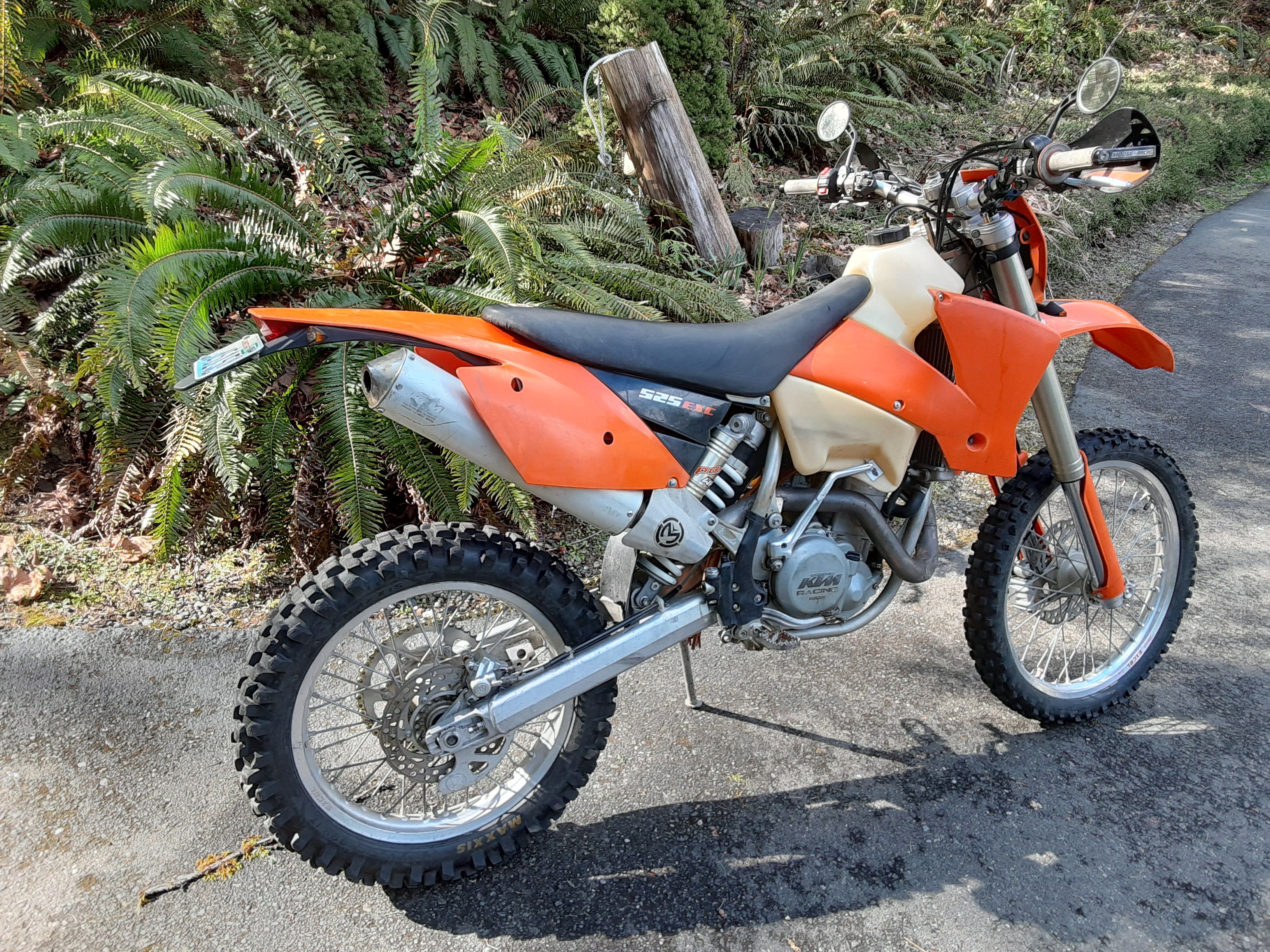 Today's ride. I love this old battle wagon. It may be a handful in the tight stuff but the bottomless pit of torque makes up for some of that. 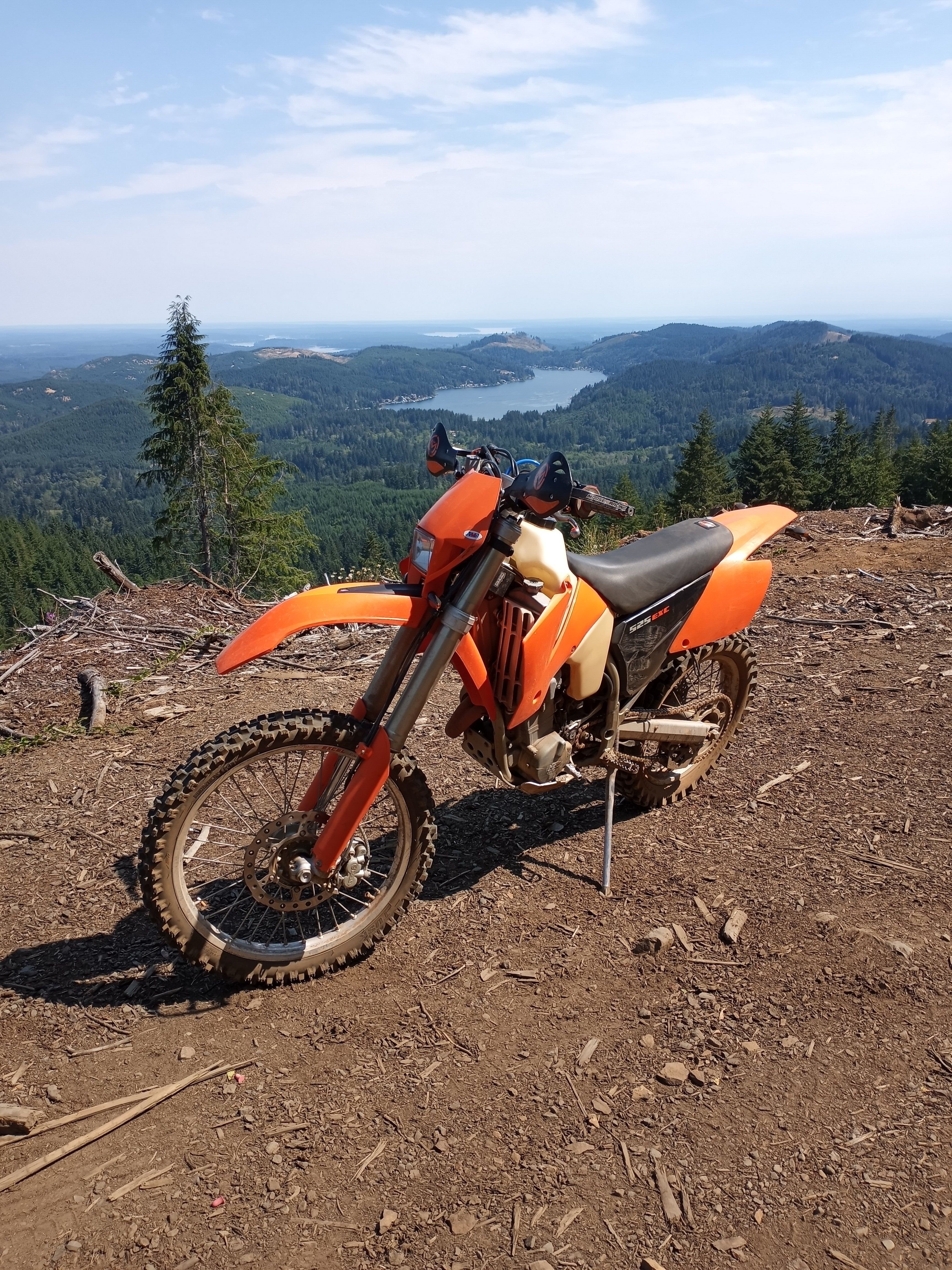 Ready to retire and ride even more!!

Last weekend with my son in law out blasting down the fire roads near Barney Reservoir, Oregon. 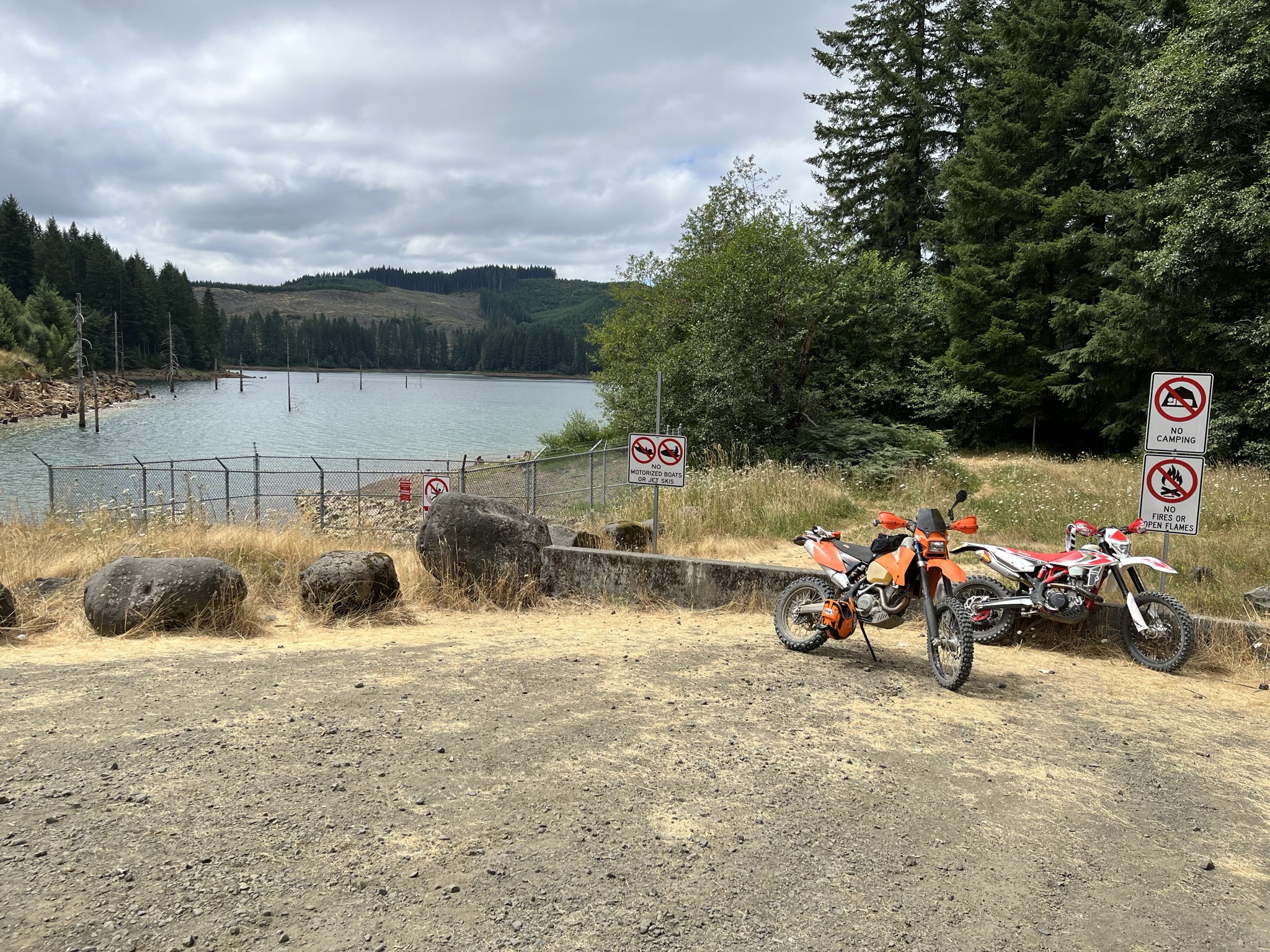 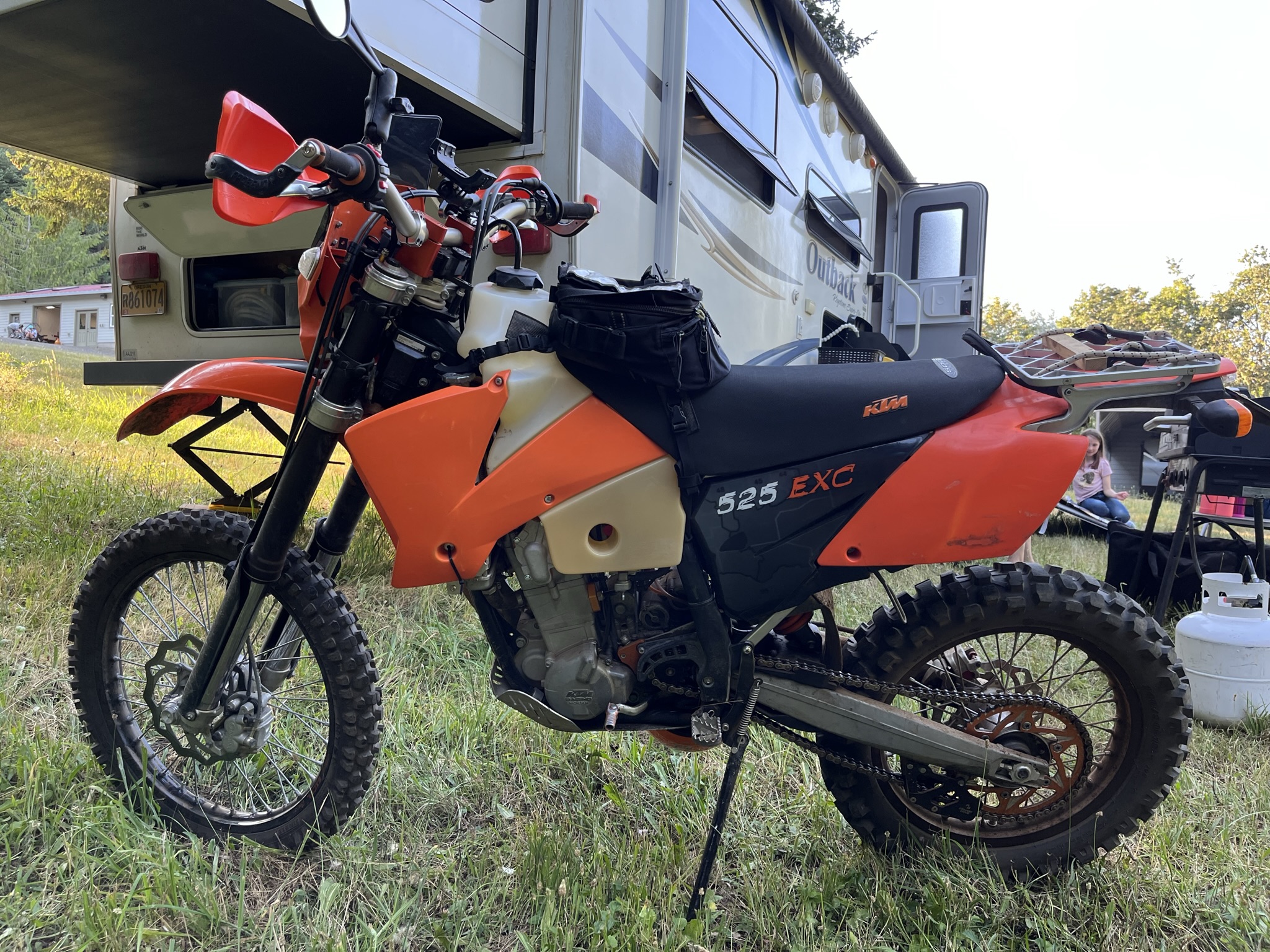 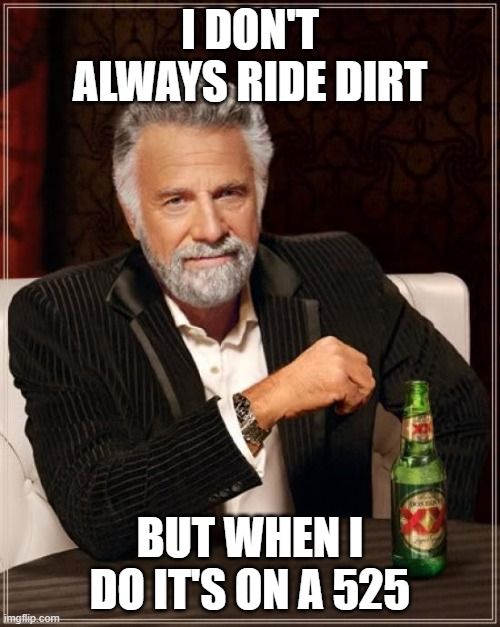 It's out of the basement for the first time since 2018. I put old shitty gas in it and it almost fired now it does nothing even with new high test. Also for some reason the new headlight and signal lights don't come on. also today we noticed right side it was spurting oil out of the seam between the engine cases looking like no gasket. A bunch of niggly things to sort before it's rolling.

Yesterday's dualsport ride on forest service roads. The old beast still draws attention from guys on heavy adv bikes asking about it. I just say it's a trade off because I would not want to run a 100 miles down the paved road on this thing A little further messing about we noticed the clutch cover, ie the engine case cover on the right side was spurting oil as we tried to fire. Looking at it it doesn't look like there's any gasket there. Damn!

Messing about with the new fairing and headlight we weren't getting any power so my buddies dug in and thought the relay was wired wrong so they took that apart. Now I have to go through the whole wiring harness again and study the wiring diagram because unplugging the new headlight connector and checking the OEM wiring harness connector is showing no power. I'm pretty sure one should be hot with the ignition. I didn't have time to check Fues but I will do that first. Damn!
You must log in or register to reply here.
Share:
Facebook Twitter Reddit Pinterest Tumblr WhatsApp Email Share Link